PSG confirm signing of Neymar from Barcelona for €222m 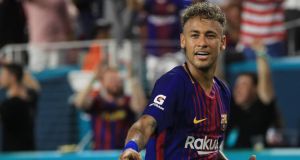 Paris Saint-Germain have signed Neymar from Barcelona after triggering his £198m (€222m) release clause, completing the most expensive transfer in football history.

After a day that saw La Liga officials at first refuse to accept the payment before being urged to “abide by Fifa’s rules” by their French counterparts LFP, Barcelona confirmed they received the payment from the 25-year-old.

“On Thursday afternoon Neymar Jr’s legal representatives visited in person the club’s offices and made the payment of €222m in the player’s name with regards to the unilateral termination of the contract that united both parties,” read the statement.

“As such, the club will pass on to Uefa the details of the above operation so that they can determine the disciplinary responsibilities that may arise from this case.”

Earlier, Neymar’s lawyers Juan de Dios Crespo and Marcos Motta went to La Liga’s headquarters in Madrid to make the deposit but officials, as its president, Javier Tebas, had threatened earlier this week, declined to accept the payment.

“We can confirm the player’s lawyers came to the La Liga offices this morning to deposit the clause and that it has been rejected,” a statement from the league said. “That’s all the information we are giving out at this moment.”

In response, the Ligue de Football Professionnel, which governs the top two leagues in France, called for the matter to be resolved “as soon as possible”.

“The LFP is surprised and does not understand the refusal of La Liga to simply accept the payment of the release clause for the player Neymar,” read the statement.

“The LFP asks La Liga to abide by the Fifa rules and its responsibilities. The LFP supports Paris Saint-Germain and wishes Neymar to join Ligue 1. The legal services of the LFP are in support and at the disposal of Paris Saint-Germain so that the Neymar contract is approved as soon as possible.”

Tebas has argued the deal would infringe financial fair play and wants to protect Spain’s leading clubs. The transfer is worth around £450m in wages and fees.

Neymar went to Porto on Wednesday for a medical in anticipation of joining PSG, who are aware of the implications of FFP on this transfer and have been working on ways of complying with that. He could now be unveiled on Friday, with preparations already underway in the French capital.

Luis Suárez followed Lionel Messi by posting an Instagram message to Neymar. “My friend I wish you the best in everything that comes!!! Also thank you for your support, for everything that I learned with you and for the unique moments that we spent together!!!! Keep like this and never change love you little bro.”

1 Gordon D'Arcy: Ireland must go after victory by frightening France into mistakes
2 Champions Cup draw: Connacht drawn with Pat Lam’s Bristol and Simon Zebo’s Racing
3 Henshaw the only change as Andy Farrell names Ireland team for Paris
4 Giovagnoli’s appointment at Dundalk ‘a great story’ says Arsenal boss Arteta
5 Cian Healy: ‘Realistically I got away with murder when I was younger’
Real news has value SUBSCRIBE
Crossword Get access to over 6,000 interactive crosswords