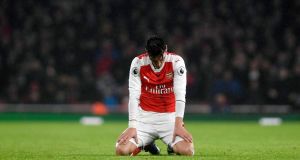 Mesut Ozil during Arsenal’s loss to Watford on Tuesday. Photograph: Will Oliver/EPA 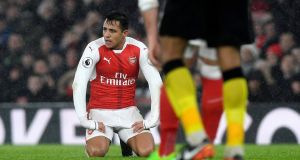 Alexis Sánchez during Arsenal’s loss to Watford on Tuesday. Photograph: Will Oliver/EPA

The vast majority of a football manager’s life revolves around dealing with situations that are testing, thought-provoking and demanding but once in a while something magical comes along that makes all the questions and pressures and nonsense they have to deal with in their everyday work seem humdrum.

For Arsène Wenger one of those came along at the beginning of this season when he watched his team produce a blueprint performance. Chelsea were demolished with a swagger, 3-0 at the Emirates, thanks to an impressive demonstration of dashing attacking mixed with rigorous team control. “It’s one of those moments in your life where you think: ‘Today is a great day,’” said Wenger.

It was clearly an awful day for Antonio Conte, who duly went off to the drawing board to come up with a brilliant new plan. His team lay eighth in the table, eight points behind the then leaders Manchester City, and the comprehensive nature of the defeat at Arsenal provoked him to press the reset button.

He rebooted his Chelsea team, with a new formation introducing his favoured defensive three, and they have not looked back. Revving up quickly, efficiently, excitingly, they have found that consistency that any potential title-winners aspire to. Tuesday’s draw at Liverpool was a rare drop on the points stakes.

The two London clubs meet again on Saturday morning and since Wenger’s sweet September glow, when Arsenal zipped three points in front of Chelsea thanks to a trio of smart goals from Alexis Sánchez, Theo Walcott and Mesut Özil, there has been a 12-point swing.

So here we are. Here Wenger is, in a familiar position fending off familiar criticism after a painful loss. Chelsea’s consistency is a bedrock for them but it is the kind of platform that Arsenal – whose form has a tendency to settle into a decent rhythm and then suddenly lurch – cannot emulate.

A forlorn Wenger tried to make sense of why his team capitulated against Watford on a damp, dispiriting night but there were no easy answers. His crestfallen expression suggested his difficulty explaining this psychological foible in his team. He had warned them to be wary of Watford, to expect them to put energy and physicality into it. Don’t be casual. Don’t just go out there and expect an easy ride. (They were inexplicably casual.)

Not for the first time this season Arsenal wasted a promising opportunity. Had they beaten Watford at home, as they half-expected, that would have taken them to within six points of Chelsea before the trip to Stamford Bridge – a scenario with an interesting edge to it. Now they face a far more trepidatious journey courtesy of a nine-point gap and punctured confidence.

It is as if they suffer from some kind of repetitive, episodic, jerky-form syndrome: Arsenal are good at getting back on the bike after a fall but once they start to gather speed and look capable of catching some competition they crash. Then they get back up again until the next crash.

This season’s evidence goes back to the aftermath of that 3-0 win against Chelsea, when they were collecting wins for fun. But as soon as they had the possibility of hitting top spot Arsenal clammed up, as if stifled by pressure. They could not flex their muscles to beat Tottenham or Manchester United, both of whom were under-strength at the time. Then they returned to the win trail before the pressure stunted their progress again with back-to-back defeats at Everton and Manchester City. After clambering back on the bike they hit the skids against Watford. And so it goes on?

Despite the efforts of Arsenal’s sports psychologist, this pattern is a tough one to crack. Raising the spirits to take on Chelsea, who in recent years have doled out plenty of punishment to them at Stamford Bridge, is on the agenda. But Wenger has plenty to ponder, not least how to cope in midfield. It has been his problem area all season, with Santi Cazorla’s campaign wrecked by injury, Aaron Ramsey invariably straining for fitness or form, and Granit Xhaka enduring a complex and suspension-troubled start to his Arsenal career. Mohamed Elneny (now at the Africa Cup of Nations) and Francis Coquelin put in the effort but cannot be relied on to dominate powerful opponents.

Wenger has spent all season trying to find the right combination, the right balance, to help support his team from the midfield heartland – so vital to protect and project play. Meanwhile across London, N’Golo Kante and Nemanja Matic, with Cesc Fabregas filling in where necessary, have gone from game to game generally ruling the middle of the park with minimum fuss and maximum control.

Wenger could really do with another great day, something unexpected to make people sit up and take notice. But even then, the bigger test would be for his team to go on without another ill-timed falter. Guardian service