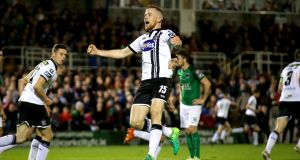 Stephen Kenny had said just before this game started that his side hadn’t travelled south just to be bit-part players in a Cork City coronation and to the late, great dismay of the home support, the Dundalk manager was as good as his word.

Cork dominated their rivals for the best part of an exhilarating evening and came within three minutes of securing the win they needed to wrap up the title but when Robbie Benson grabbed an unexpected equaliser for the visitors, Turner’s Cross fell suddenly silent.

And so, still needing two more points to be certain of top spot, Cork City must go again; or at least they might have to, depending on how Dundalk do in Ballybofey. Finn Harps are fighting for their own top-flight survival so nothing is certain but last year’s champions will not, it is safe to assume, face anything like the intensity of this game on their trip to Donegal.

Frustrated, it seemed, by the games that had gotten away in recent weeks, John Caulfield’s men went at their rivals like a team whose patience had finally run out. They put it up to Kenny’s men from the very first minute, throwing themselves into every challenge and pushing themselves to what seemed astonishing lengths at times as they sought to compete for every inch of the pitch.

Conor McCormack, in the end, was the one to be named as the Man of the Match but it might easily have been Alan Bennett, Stephen Dooley or a handful of others.

Collectively, Caulfield’s men threatened at times to simply sweep away the team that had won the last three leagues with the pace of their play.

No slouches themselves under normal circumstances, it was all Dundalk could do this time just to keep up for most of the night. It was feisty stuff at times and referee Rob Rogers had to think twice on a couple on occasions after early yellow cards had left players from both sides walking a tightrope.

In almost every instance, though, it was the Cork players whom successfully imposed themselves on opponents, at least until the closing stages, with the fierce determination displayed in challenges by McCormack on David McMillan or Dooley on Seán Gannon leaving a lasting impression even from the safety of the stand.

The goal Dundalk conceded never seemed, to be fair, like the sort of thing that should decide a league title, though Cork would not have been complaining. The build-up was swift and concise with Gearóid Morrissey and Dooley both doing well but Garry Buckley took a little too long to get his shot away and after Gary Rogers parried it, Seán Hoare was desperately unfortunate to see his clearance come clattering back off Brian Gartland and into the empty net.

In every other way, though, the stage seemed perfectly set with Turner’s Cross full and the home team flying.

Seán Maguire, one suspects, might well have made a difference – he usually did – but City created the sort of chances during the first hour that the players present should have been able to finish. They comfortably edged things on the balance of play and carved their opponents open with Gartland clearly struggling at times.

Buckley forced one very fine save from Rogers while Jimmy Keohane spared the goalkeeper the need to make another when he hastily fired over as the Dundalk defender came charging back to prevent him getting his shot away at all.

“It was a phenomenal first half,” acknowledged the City boss at the end as deflated supporters started to make their way home, “and while Dundalk threw everything at us [late on] and we gave away a soft goal, it’s still in our control.”

Around their manager, the Cork City players tried to take in just how close they had come with Dundalk’s late spell of pressure barely yielding a chance worthy of mention until Dylan Connolly’s late, low cross was not dealt with well and Benson pounced to poke the loose ball home.

“We played some great football,” said Bennett, one of the few survivors from the title winning team of 2005. “We got caught out at the end but we are one step closer.”