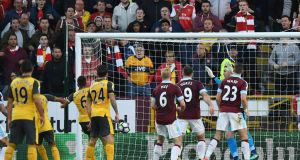 Laurent Koscielny turns the ball home in the 93rd minute to give Arsenal a last-gasp win away to Burnley. Photograph: Reuters

It was the third minute of stoppage time, and the cruellest of circumstances for this tough, obdurate Burnley side, when Arsenal’s possession finally paid off and the seemingly endless 20th-anniversary commemorations for Arsène Wenger were given a shot of euphoria that had not seemed like coming.

The game’s late, decisive moment was contentious, to say the least, and once again English football was given a reminder that perhaps it is time for the introduction of video technology, a debate that seems to have been going on for every bit as long as Wenger has been at Arsenal.

Naturally, Wenger did not see it, to add to the already bulging file of other controversies he has missed over the last two decades. He did, however, accept Arsenal’s fifth successive Premier League win might have been accompanied by a hefty amount of good fortune.

For starters, the electronic board had signalled two minutes of stoppage time but the real issue came from the fact the ball ricocheted in off Laurent Koscielny’s arm. Koscielny had actually kicked it against himself but his close-range shot was going wide until it diverted off the scorer’s elbow.

The only possibly mitigation for the referee, Craig Pawson, was that everything happened so quickly and that, to give him the benefit of the doubt, perhaps he did not have an entirely clear view in a congested penalty area. All the same the Burnley manager, Sean Dyche, was being careful with his words when he said the official might have a “tough night” reflecting on his part in the late drama.

“It’s hard not to be frustrated when something is taken away from you that is in the hands of the referee,” Dyche said. “Our analyst tells me it was six or seven seconds over [the allotted time] when it went in. That doesn’t sound a lot, but it is in this case. And it’s a handball goal. You’re frustrated when you lose any goal but particularly one like that.”

Wenger was still probably entitled to think his team had enough of the ball to warrant the victory. Equally, the Arsenal manager accepted it was a laboured performance riddled with “technical mistakes”.

Arsenal did at least conform to the old adage that all teams with realistic title ambitions need to know how to win when playing badly. But it was not easy to watch this performance and find a plausible argument that Arsenal have fixed the flaws that have left them short since their last championship 12 years ago.

“It was the kind of game we could have won 1-0 or lost 1-0,” Wenger said. “Burnley make everyone suffer here.”

This was certainly several notches down from the performance with which Wenger’s team won 3-0 against Chelsea the previous weekend. Arsenal might have been the more cultured side but they looked surprisingly devoid of wit or imagination on the ball and, for all their possession, it was strange to see an attacking quartet featuring Alexis Sánchez, Mesut Özil, Theo Walcott and Alex Iwobi create so little.

Burnley, playing with great resilience and togetherness, demonstrated why they had conceded only five goals in their previous 17 league games at Turf Moor and Michael Keane was outstanding in the heart of their defence.

Wenger was clearly frustrated by the manner in which Walcott, Iwobi and, most surprisingly, Özil did not show a great deal of poise when Arsenal were in encouraging positions.

Iwobi, patrolling the space on the left wing where Sánchez would usually be found, had a particularly difficult afternoon, encapsulated by his attempt to pick out the top corner of Tom Heaton’s net early in the second half. His shot sliced all the way across the pitch and went out for a throw-in close to the corner flag.

Sánchez was playing through the middle and did at least threaten with a couple of second-half efforts, one saved by Heaton and the other going narrowly wide. He is not, however, an orthodox centre forward and Arsenal missed Olivier Giroud’s ability to hold up the ball and play in team-mates.

Burnley’s frustrations were exacerbated by the fact, as Wenger later put it, the home side “looked like they could score from every corner”. Keane turned one against the crossbar and Burnley will also reflect on another headed opportunity, this time for Johann Berg Gudmundsson, earlier in the second half.

For the most part, however, the home side were unashamed about their ploys of conservatism.

“Burnley made life very difficult for us,” Wenger said. “They were organised in a very intelligent way.”

Until, that is, the 93rd minute when Özil played a short corner to Sánchez. Walcott applied the first header before Koscielny and the substitute Alex Oxlade-Chamberlain went for the follow-up.

“I was fuming because we took a short corner,” Wenger said. “We were at the end of the two minutes [stoppage time]so why not just play the corner over? I didn’t see the ball go in but I’ve been told we were fortunate.”