Antonio Conte still haunted by Arsenal loss ahead of derby 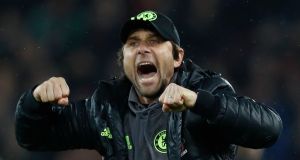 Antonio Conte has admitted he is still haunted by Chelsea’s defeat at Arsenal in September, a capitulation that forced him into the risky decision to switch to a back three despite never previously drilling his team in the system, but which has since proved a tactical masterstroke.

Conte watched his side wilt at the Emirates Stadium to trail 3-0 at the interval, a deficit they never threatened to retrieve thereafter. The Italian flung on Marcos Alonso, recently recruited from Fiorentina, for his first Premier League appearance for Chelsea 10 minutes into the second half, instigating that switch to 3-4-3. The team have won 15 of their 17 subsequent games to establish a nine-point lead at the top.

The ease with which his players adapted to the new formation has been remarkable, all the more so given Conte’s admission that these personnel had not worked on that system in the build-up to the Arsenal match. Chelsea had played with three centre-halves for periods of the pre-season in Austria and the United States, but several senior players had been absent after summer international duty. David Luiz, the linchpin at the back, was only signed on deadline day in August.

“The first time was during the Arsenal game,” said Conte, who had used the formation at Juventus and with Italy. “Never [with these players in pre-season]. To tell you the truth, in my mind there was always this option.

“It’s not as simple to say a change in formation took us to the top. It has taken work. We know all the work we did in the past, and we’re doing now with the team to try and improve this system. But I only decided to do it 10 minutes into the second half at Arsenal. I’m happy I did because now we are top of the league and, back then, we were eight points behind Manchester City. That just shows the situation can change very quickly.”

The magnitude of that loss at Arsenal, coming so soon after a home defeat by Liverpool, had shocked Conte, a manager who had enjoyed almost constant success at Juventus. Indeed, it was the heaviest he had endured in almost six years, dating back to his time in charge of Siena and a Serie B loss against Empoli at Stadio Carlo Castellani.

“It was a shock, for sure,” he said of the reverse at the Emirates Stadium. “Usually, my teams are not used to conceding three goals in the first half, so it was a shock, and a shock I tried to transfer to my players.

“I don’t want this. We worked a lot to avoid this happening again in the future. But this game is always in my mind, always present. It may seem far [away], but it’s important to remember that defeat because it was so bad. I hope it’s also in the minds of my players this time. A lot of things have changed since. For sure, we are more of a team now.”

They are more settled as a group, even after the departures of experienced players such as Branislav Ivanovic, Oscar and Mikel John Obi last month, with plans already afoot to strengthen significantly in the summer. Chelsea are increasingly confident of securing the Spain striker Álvaro Morata from Real Madrid, with a fee of about €58 million mooted for the 24-year-old. Conte had taken Morata to Juventus just before accepting the Italian national manager’s job in 2014, and any deal that would reunite that pair at Stamford Bridge would frustrate Arsenal, who have long coveted the forward.

Arsène Wenger admitted yesterday that he had also twice missed out on securing N’Golo Kanté, both during the player’s time in France with Caen and over the summer when it became clear that the title winner would be departing Leicester City. The France international’s tireless performance in the draw at Liverpool in midweek – described as “outstanding” by Conte – was a reminder of the quality Arsenal had hoped to attract. Granit Xhaka, secured from Borussia Mönchengladbach for marginally more money than Chelsea paid Leicester for Kanté, is suspended for today’s game.

Kanté, in contrast, appears on course to claim a second successive Premier League title, with his influence at Leicester and now Chelsea having proved key to each team’s pursuit.

“No, no. First of all, we haven’t won the title yet this season. I hope [we do]. For sure, if this happens, for N’Golo it would be a great achievement. But I don’t trust in the theory that you can win only because of one player. That doesn’t happen. Ever. Win, draw or lose, the team is together.”