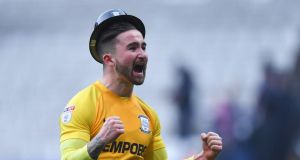 Maguire, on his return to action after being sidelined since November 1 with hamstring trouble, fired home in the 77th and 90th minutes after Tom Barkhuizen cancelled out Mark Beevers’ 11th-minute opener.

“I don’t think he would have dreamed of a better game back,” said Neil of Maguire after his North End side boosted their play-off hopes with a first win in five games.

“He came on with the game really tight and us needing to force the issue to get the win and he gets two goals.

“He has only played 45 minutes of football in three or four months. So, to come on and deliver that tells you everything you need to know about him.”

Maguire was booked by referee Peter Bankes for celebrating wildly in front of Preston’s 4,000 fans after his opening goal, 12 minutes after replacing Billy Bodin.

“There is a lot of pain and frustration when you are out for that long,” added Neil.

“It is the worst thing for a footballer. I went through it myself because I was out for a year.

“You want to be out there helping your team-mates. The fact is Sean has now scored six goals this season; our top scorer (Barkhuizen) has eight. So, it just shows you how important he is to us.

“The fact we are where we are in the table having missed that type of quality speaks volumes for the squad we have got.”

On his team’s chances of finishing in the top six, Neil added: “We had to win this game to stake a claim for a place at the top.”

Wanderers boss Phil Parkinson had no complaints with the final result that leaves the Trotters still battling for survival.

“We did a lot of good things in the first half but in the second half they were better than us,” he said.

“They looked more threatening than us on the break and we got punished. The goal they got back lifted their team especially kicking towards their 3,500 fans.

“We didn’t respond as well as we would have liked. There wasn’t a lack of effort, we just couldn’t get a foothold in the game.”

Parkinson confirmed the arrival of Nigerian striker Chinedu Obasi until the end of the season subject to international clearance.

“He is a player with good pedigree,” added Parkinson of the African frontman with experience of Swedish and Chinese football.

“If we hadn’t made a decision he could have gone elsewhere.

“The lad was happy to sign a pay-as-you-play deal. So, it was a no-risk decision.”