The winger appeared in court yesterday on sexual assault charges 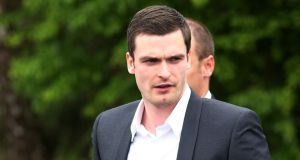 Sunderland winger Adam Johnson leaves court yesterday where he faced three offences of sexual activity with a girl under 16 and one of grooming. Photo: Scott Heppell/PA

Adam Johnson could have a significant role to play as Sunderland attempt to drag themselves over the Barclays Premier League finishing line at Arsenal.

The Black Cats head for the Emirates Stadium on Wednesday evening a little more than 48 hours after the England international appeared before magistrates to face three offences of sexual activity with a girl under 16 and one of grooming.

Johnson, whose solicitor indicated at Peterlee Magistrates’ Court that the player would deny all the charges, is in the squad for the clash with the Gunners, from which a point would be enough to secure his club’s top-flight status.

And having seen the impact the 27-year-old made as a substitute against Leicester at the weekend, head coach Dick Advocaat has hinted that the former Middlesbrough and Manchester City winger could start.

Advocaat said: “He’s in the squad and when you are in the squad, there’s always a chance you will start.

“This team works so hard and you have to fair to all of them, but Adam is a player who can do something different for us. His style is different from others, and you saw that when he came on against Leicester.”

Johnson is yet to be named in the starting line-up by Advocaat, who will take charge of his eighth and penultimate — for the time being, at least — game in North London, but has come off the bench in six of the previous seven.

Advocaat remains coy over his future amid speculation that he could extend his stay at the Stadium of Light should he manage to keep the club up.

Reports from Holland have suggested he has promised his wife he will not commit to a longer-term role on Wearside, although he was giving little away when quizzed about his future on Tuesday afternoon.

He said: “We will see. Next week, I will take the decision.”

Sunderland face a difficult conclusion to yet another testing campaign with away games against FA Cup finalists Arsenal and champions Chelsea.

But the point they collected at the weekend means any reward from either will be enough to end their relegation fears even if Hull manage to beat Manchester United on Sunday.

Advocaat has refused to write off either fixture from the off and remains as confident as he has been since day one that they will seal their own fate.

“As a coaching team, we know what we want. This isn’t our first club and we know how we can get the best out of the players, and we are very straight with them because that is the best way.

“When I came, we knew we had nine games left, five away including these two. We have never run away from that.

“I think every player enjoys playing at Chelsea and Arsenal. We have nothing to lose because everyone expects us to lose — but we don’t.

“I know that we will give both of them a really difficult time and try to get what we need. ”

On a personal note, Advocaat is looking forward to the prospect of locking horns with Arsene Wenger and Jose Mourinho, two men for whom he has enormous respect.

He said: “Wenger and Mourinho are two of the best in the world. If you see their records, they are unbelievable. I have great respect for both of them for what they have achieved in the past, prizes and the way they play.”

However, asked if he would settle now for a drab 0-0 draw, the Dutchman replied with a smile: “Yes, just a little bit.”