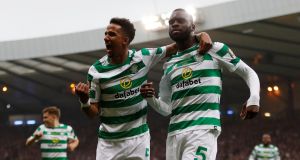 Odsonne Edouard was the hero as Celtic secured an unprecedented domestic triple treble with a thrilling 2-1 Scottish Cup final win over Hearts at Hampden Park.

After an absorbing but goalless first half, Gorgie attacker Ryan Edwards struck from close range in the 52nd minute.

However, Hoops striker Edouard levelled with a penalty just after the hour mark before firing in the dramatic winner with eight minutes remaining.

It is the first time that Celtic have won the trophy in three successive years and their comeback win provided further evidence of their current domination of the Scottish game, although Craig Levein’s side did all they could to halt the green and white juggernaut.

The form guide had pointed clearly to a win for Neil Lennon’s team. The Hoops had clinched their eighth successive Premiership title two weeks ago while Hearts arrived with one win in eight.

There were some surprises among the team line-ups, as Lennon kept Mikey Johnston in the side after scoring a double in last week’s 2-1 league win over the Jambos, while 16-year-old forward Karamoko Dembele started on the bench with no place for Kieran Tierney, who faces an operation on a double-hernia.

Of the three Jambos injury doubts, midfielders Peter Haring and Arnaud Djoum declared themselves fit with striker Uche Ikpeazu on the bench, with 16-year-old Aaron Hickey handed a start.

The day and date was loaded with significance. May 25, 1967 was the date Celtic became the first British team to win the European Cup and players wore numbers five and nine on their shorts in tribute to centre back and skipper of that team, Billy McNeill, and striker Stevie Chalmers, who scored the winning goal in the 2-1 over Inter Milan, after both died recently.

Hearts began the match perhaps more positively than anticipated and although Hickey’s 25-yard drive was easily saved by Hoops goalkeeper Scott Bain in the 15th minute, it indicated growing confidence.

Seven minutes later, however, only a stretching, last-gasp tackle by Hearts stopper John Souttar prevented Edouard ending a swift Hoops counter-attack with a shot on goal.

That interval score would have suited Hearts but they went one step better soon after the break. Djoum combined with Hickey and when his weak shot from the edge of the box was stopped by team-mate Sean Clare he quickly back-heeled it to Edwards, on loan at St Mirren in the first half of the season, and he stabbed it over the line from seven yards.

Back came Celtic with a vengeance. When Hearts goalkeeper Zdenek Zlamal was judged by referee Willie Collum to have fouled Edouard inside the box, the Frenchman picked himself up and slammed the penalty low into the corner with the Jambos number one almost getting to it.

Craig Wighton, Ikpeazu and Oliver Bozanic all came on for Hearts as the tension ramped up and extra-time loomed, only for Edouard to fire in the winner in the 82nd minute when he raced on to Mikael Lustig’s header -misjudged by skipper Christophe Berra – and drove the ball past Zlamal.

Hearts tried all they could to get back in the final moments but it was just meant to be for Celtic.

1 Liverpool could seal title win at Anfield when they host Crystal Palace
2 Betting shops face uncertain future as they prepare for Monday reopening
3 World Rugby issues new guidelines on high tackles and shoulder charges
4 Rosemary Smith: 'The flag drops, the bullshit stops and away we go'
5 No wins since 1983: will Scotland end their Twickenham hoodoo?
Real news has value SUBSCRIBE
Crossword Get access to over 6,000 interactive crosswords