Chuck Blazer was undercover for FBI for 18 months 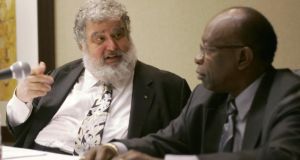 Former Fifa executive committee member Chuck Blazer agreed to act undercover for US prosecutors and has been cooperating since at least 2011 in the government’s investigation of soccer corruption. Photo: Wilfredo Lee: AP

Chuck Blazer was working undercover for the FBI for 18 months while still a member of Fifa’s executive committee, his plea agreement with US justice authorities has revealed.

The 70-year-old struck a deal to become an informant to avoid a potential jail term of up to 75 years after pleading guilty to 10 charges, including bribery, money laundering and tax evasion.

His plea agreement has been made public and confirms he agreed to work undercover from December 2011.

The US justice department last month announced charges against a total of 18 people for alleged involvement in football-related corruption. Blazer and three others have pleaded guilty, while seven Fifa officials arrested in Switzerland on May 27th are contesting extradition to the USA.

The 19-page plea agreement says: “The defendant agrees to furnish to the office all documents and other material that may be relevant to this investigation... and to participate in undercover activities pursuant to the specific instructions of law enforcement agents.”

The agreement does not detail what Blazer’s sentence will be but says his co-operation with the authorities can be taken into account.

Blazer, a Fifa executive committee member from 1997 to 2013, has admitted taking bribes to vote for South Africa to host the 2010 World Cup, and named former Fifa vice-president Jack Warner as also taking bribes.

Warner was president of north and central American and Caribbean confederation Concacaf and Blazer his general secretary. Blazer admitted, among a series of revelations, that he and Warner took bribes from Morocco for its 1998 World Cup bid and from South Africa for 2010.

The plea agreement disclosed Blazer, who is seriously ill with cancer, has already forfeited 1.95million US dollars as part of his illegal proceeds and will face making a second payment when he is sentenced. He also admitted to accepting bribes in relation to TV and marketing rights for the Concacaf Gold Cup.

The New York Daily News reported last year that Blazer had bugged meetings with executives at the London 2012 Olympics with a wire device concealed in a key fob.