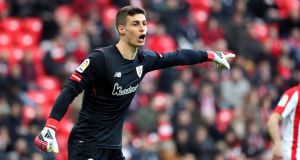 Athletic Bilbao’s goalkeeper Kepa Arrizabalaga: has a release clause set at €80 million with the Spanish side. Photograph: Luis Tejido/EPA

Chelsea will pay a world record fee for a goalkeeper to secure Kepa Arrizabalaga from Athletic Bilbao as a replacement for Thibaut Courtois, who failed to report for training for a second day in succession and is expected to sign for Real Madrid.

Kepa, Spain’s second choice and considered one of the most promising goalkeepers in Europe having impressed for his country through the junior age groups, has a release clause set at €80million.

Bilbao expect to lose the 23-year-old, who has travelled to Madrid with his agent ahead of a flight to London around 10am on Wednesday, having come close to selling him to Real for only €20 million in January.

He passed a medical in the mid-season window only for the then Real manager, Zinedine Zidane, to dissuade the board from pursuing a deal because he was wary of disrupting the team’s rhythm by changing goalkeepers halfway through the campaign. Bilbao ended up securing him to new terms, including the buyout clause, before finishing 16th with Kepa making 30 La Liga appearances en route.

Kepa and his entourage have been led to believe Chelsea are prepared to trigger the clause in a deal which would eclipse the €74m Liverpool paid Roma for the Brazil No 1 Alisson last month.

The move constitutes a surprise, not least because Chelsea, too, looked into signing Alisson earlier this summer but were apparently put off by the size of the fee. They have also been considering cheaper options such as Jack Butland and Sergio Rico of Stoke and Sevilla respectively.

Their desire to add another body in midfield is close to being resolved with the signing of Real’s Mateo Kovacic on a season-long loan deal. Both deals are expected to be announced on Wednesday.

Real have offered the unsettled Croatia midfielder effectively as a sweetener to ensure their pursuit of Courtois reaches a positive conclusion. Kovacic has made clear his desire to play more regularly and will be permitted to leave for the season. Chelsea would not have an option to make the move permanent next summer, with Real considering him a long-term successor for his compatriot, Luka Modric.

Courtois, who had been due to resume training at Chelsea on Monday following an extended break after the World Cup, was absent without leave at Cobham again on Tuesday.

Chelsea have written to the Belgian formally requesting him to return on Wednesday. The goalkeeper, who has entered the final 12 months of his contract, had made clear in a telephone conversation with Maurizio Sarri last week that he wants to return to Madrid, where he spent three years on loan at Atlético and his two children live with his former partner.

Kovacic, a £27m signing from Internazionale three years ago, has found opportunities limited at the Bernabéu and made only 10 La Liga starts last season. He would most likely play alongside Jorginho and N’Golo Kanté in Sarri’s favoured 4-3-3 system and his arrival could yet see Chelsea attempt to shift at least one of their fringe midfielders, Danny Drinkwater, Tiemoué Bakayoko or even Ross Barkley, ahead of Thursday’s cut-off.

Clubs have been put off to date by the loan fees that would be involved, with some prospective suitors quoted eight figure sums plus the entirety of the player’s wage to take them on for the season.

Bakayoko, who starts Wednesday’s friendly against Lyon, could join Milan for the season. Ruben Loftus-Cheek remains keen to prove himself at his parent club and is reluctant to leave on another temporary deal, though that situation could yet be revisited later this month if foreign clubs declare an interest in a loan.

Meanwhile, Burnley have signed goalkeeper Joe Hart on a two-year deal from Manchester City for a fee in the region of €4 million.

The Clarets confirmed the transfer on their official website, revealing an undisclosed fee had been paid for the former England number one.

Manager Sean Dyche was not expecting to be in the market for a goalkeeper this summer but injuries to Nick Pope and Tom Heaton – both England internationals in their own right – forced his hand.

Hart spent 12 years as a City player but went from undisputed first-choice to fringe player after Pep Guardiola’s arrival and spent the last two seasons on loan with Torino and West Ham.

The 31-year-old ultimately lost his place in England’s World Cup squad too, edged out by Jordan Pickford, Jack Butland and Pope for a place in Gareth Southgate’s plans this summer.

Burnley have also signed Czech Republic striker Matej Vydra from Derby for an undisclosed fee. The 26-year-old, who top-scored in the Championship with 21 goals last season, has signed a three-year deal at Turf Moor with the option of a further 12 months.