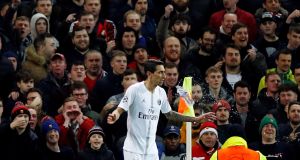 A plastic water bottle is thrown at Paris Saint-Germain’s Ángel Di María during the Champions League round of 16 first leg at Old Trafford on Tuesday night. Photograph: Phil Noble/Reuters

Manchester United and Paris St Germain have been charged by UEFA following Tuesday night’s Champions League clash between the clubs at Old Trafford.

A beer bottle was thrown from the crowd towards PSG’s former United winger Angel Di Maria in the second half of the last-16 first leg, with the Argentinian responding by picking it up and seemingly pretending to take a swig from it.

It has been reported that a bottle of water was subsequently thrown Di Maria’s way as well, and an item landed at the feet of United full-back Luke Shaw in the first half.

The case will be dealt with by the UEFA Control, Ethics and Disciplinary Body on February 28.

PSG won the game 2-0, with Di Maria setting up goals for Presnel Kimpembe and Kylian Mbappe before United’s Paul Pogba was sent off late on.

Video footage on the Manchester Evening News website showed what was reported as PSG fans chanting and waving lit flares in the city centre ahead of the game.

And a video was posted on Twitter by slates82 showing what is alleged to be PSG supporters letting off fireworks near the ground.

Chief inspector Colette Rose, silver commander for the game, said in a statement released by Greater Manchester Police: “Prior to last night’s match, we worked closely with TfGM [Transport for Greater Manchester], the local authorities and the clubs to fully assess the appropriate policing response and ensure fans could travel to the stadium and enjoy the game in a safe environment.

“To minimise disruption to the general public as fans were arriving, a plan was put in place to signpost people to a number of travel options, including public transport. Broadly speaking, this worked well, although there were some minor delays due to damage caused to some trams. TfGM has passed CCTV onto us and this footage will be reviewed.

“We are aware of a report that a plastic bottle was thrown onto the pitch during the game and a man was removed from the stadium by club stewards. We are also aware that seats in the stadium were damaged, and we have been in conversation with the club regarding this matter.

“We will continue to work with clubs and partners around policing arrangements for future fixtures.”