Sombre Manchester City in no mood for Roma slip-up 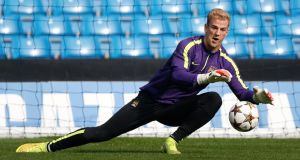 Joe Hart: “It is a big game after a disappointing start in Munich . . . We are aware it is the Champions League and not the knockout phase but especially at home we are going in trying to win the game.” Photograph: Andrew Yates/Reuters

Manchester City’s Champions League ambitions are on a tightrope as Roma visit tonight. Manuel Pellegrini’s side need to win or next month’s trip to CSKA Moscow becomes a game of Russian roulette.

City need to win the group so as to have the best hope of advancing beyond the last 16. Yet Pellegrini’s balancing act is complicated by having to ensure they make a credible defence of the championship, unlike the dismal effort of two years ago.

Ashley Cole, Roma’s left-back who refused to answer a question about Rio Ferdinand’s claims to have felt betrayed by Cole over the John Terry-Anton Ferdinand racial abuse case, believes it is City who are under the cosh.

“Yes, they have not been [beyond the last 16] and there is pressure on them. They have big players and I know some of them are very hungry – [Joe] Hart and [James] Milner and Lamps [Frank Lampard] will always want to keep on winning. There’s less pressure on us.”

While defeat by Roma at the Etihad Stadium could be filed under “disaster” as this would leave City with no points from two games and the Italians a maximum of six, even a draw would have City arriving in Moscow needing a win to have any chance of topping the group.

The defeat of CSKA was masterminded by Rudi Garcia, the colourful manager who has enjoyed life in the eternal city since taking over at the start of last season.

Last season the French man guided Roma to second place in Serie A and his team have won all five league games this campaign to be second behind Juventus on goal difference.

Garcia recruited Cole on a free transfer from Chelsea in the summer to pair the left back with Brazil’s World Cup right-back Maicon in a team who still have the venerable Francesco Totti (38) as their focal point.

Hart, who is line to be recalled after being dropped for City’s past two matches, accepts the challenge will not be easy. “It is a big game after a disappointing start in Munich,” said the goalkeeper

. “We are aware it is the Champions League and not the knockout phase but especially at home we are going in trying to win the game.

“They have been doing very well. We have focused a lot more on them since they were drawn in our group. They got a great result on match day one. Every game is tough in Champions League but we are up for it and more than capable of winning. It is pretty much standard for the Champions League.

“It is great to see Ash. It’s brave to make the move out to Roma after a great career at Arsenal and Chelsea and great to catch up and see how he is doing out there.”

City cannot afford another slip-up. As well as at Bayern, late goals have been conceded to Real Madrid and Barcelona in recent seasons, as Hart is all too aware.

“Those have cost us the game in some big games,” he said. “But also shown we are definitely up there and can play with the big boys and we just need to finish the game off.”

Stefan Jovetic is back in the City squad after recovering from a hamstring injury but Fernando and Samir Nasri miss out. Guardian Service