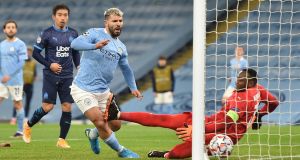 Ferran Torres’s fourth goal of the group stage ensured Manchester City headed the phase unbeaten for a second consecutive year, their 16 points the joint-highest return of any English team in the competition’s history.

Pep Guardiola will be as pleased with this cold-eyed display as he will at having Sergio Agüero back on the field, the forward scoring after only 10 minutes of a late cameo.

Guardiola retained only Ilkay Gündogan and Riyad Mahrez from Saturday’s win here over Fulham, while naming Agüero as a substitute, returning after a knee problem, the American Zack Steffen in goal for his Champions League debut, and Torres at No 9, with Gabriel Jesus also on the bench.

Despite the changes and his side already having won the group, Guardiola patrolled the technical area with his usual intensity. A familiar pattern of fast passing often moved the ball towards Steve Mandanda’s goal, as when Phil Foden completed one sequence with a cross aimed at Kyle Walker. The right back leaped high but his header was misdirected. A clearer chance came when Bernardo Silva threaded a pass to Mahrez. The Algerian was clear but left his manager clutching his head as the shot was saved by Mandanda.

City’s opener felt a matter of time but it was not to come during the first half. Their incessant pressure next featured Gündogan’s free-kick being met with a powerful Aymeric Laporte header but, again, this was off target.

Now came a first foray from Marseille. Dimitri Payet switched from his central striker role to the right and floated the ball in. City can be vulnerable aerially and so it proved: Laporte was nowhere near the delivery and Valère Germain should have done better than a miscued header.

Then there were two eye-catching moments. First, Mahrez trapped a spinning diagonal ball dead with nonchalance and played in Walker. Then a mazy Foden run took him into space where he unloaded at goal but the ball was skied over.

By the interval the contest remained goalless. After a 20-yard Mahrez effort went wide, Marseille enjoyed some sustained pressure. John Stones, on for the injured Eric García, made a sliding challenge to deny Germain.

Moments later Morgan Sanson steered past Steffen’s right post. And, then, Pape Gueye was denied by the latter at close range.

André Villas-Boas’s side’s hopes of finishing third and thus earning a Europa League berth were rocked three minutes into the second period. This time City’s radar was precise – in the slick relaying of the ball from Laporte to Silva to Mahrez to Torres – and in the latter’s ruthless finish.

This had Villas-Boas visibly furious as Marseille’s task of bettering Olympiakos’s result in order to qualify – the Greeks were losing to Porto at that point – had become far harder. The sight of Kevin De Bruyne, Jesus and Benjamin Mendy warming up will not have cheered the visitors either, Raheem Sterling having already replaced Gündogan at the break.

Still, Florian Thauvin offered a glimpse of hope for the visitors with a run on the right though his cross was cut out and, now, Foden next showed for City. He disappointed when twice only giving Mandanda tame efforts that were easy for the goalkeeper.

The sky blue shirts were, though, in firm control, flooding Marseille’s final third at will. Along the touchline a grinning Agüero enjoyed a vigorous warm-up and was then introduced on 66 minutes.

Agüero’s instinct allowed him to make it 2-0 from close range after Nathan Aké’s header was saved, before Sterling bundled in a late third. – Guardian