Real Madrid emphatically back on track against Basel 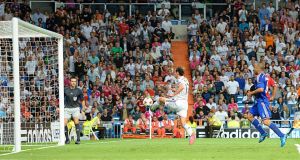 Real Madrid escaped to Europe for a little therapy. It is 114 days and only six games since they won the trophy that defines them, but the pressure was building and, incredibly, the talk was of crisis. Here they found peace, for the moment at least, with a 5-1 destruction of FC Basel. An own goal started it and by half-time Gareth Bale, Cristiano Ronaldo, and James Rodríguez had all scored. Karim Benzema added another late on.

This was a victory Madrid needed. The atmosphere had become tense. Madrid sat 13th in the league after suffering two losses in three games, including a derby defeat against city rivals Atlético Madrid here three days ago. They had also lost the Spanish Super Cup to Atlético. But their coach, Carlo Ancelotti, described this game as an opportunity, and he was right. The debate will be whether Madrid were very good or Basel were very, very bad.

There was even a brief glimpse of redemption for the club captain, Iker Casillas, at the heart of a bitter civil war: every time he touched the ball, there were whistles from some supporters; applause from others. When he saved from Derlis Gonzalez in the 66th minute after Raphael Varane’s mistake had put the Paraguayan clean through, there was a roar and a momentary chant of “Iker! Iker!” Until then, this seemed like a night in which, unlike his team-mates, he would find no refuge. When Gonzalez’s first effort had flown past him just before half-time, it did not matter that Madrid had been wide open or that it was a superb shot: the pitch rose once more. It didn’t even matter that Madrid had already scored four.

It had been a curious half, more satisfying in the stats than the sensation. Madrid had had six shots on target and scored three. Basel had scored the other for them when Nacho’s cross deflected in off Marek Suchy after quarter of an hour.

Luka Modric then produced a gorgeous pass with the outside of his foot for Bale. With Tomas Vaclik way off his line, Bale lobbed it over him, ran past and nudged home. A minute later, Modric and Bale set up Ronaldo. The Portuguese then gave a wonderful chance to Benzema, another man under pressure. Vaclik made the save, but Rodriguez scored easily from the rebound. Three goals had arrived in six minutes.

There were no more until Benzema thumped a fifth off the bar with 10 minutes remaining. Indeed, it had been Basel who came closest when Fabian Schär hit the post and Gonzalez had run through, allowing Casillas to make a save that might prove as significant as the five goals.