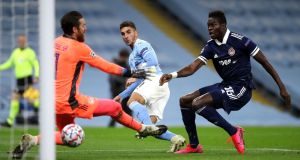 Manchester City have a maximum nine points in a group stage that is going perfectly. Factor in a fine display from Ferran Torres and Gabriel Jesus’s goal-scoring appearance as a substitute following a long lay-off and Pep Guardiola can be pleased. His team are rolling along impressively, showing signs of the formidable force they can be.

With an eye on Liverpool’s visit on Sunday, Guardiola drafted in John Stones, Nathan Aké and Oleksandr Zinchenko for Rúben Dias, Aymeric Laporte and João Cancelo in defence, while Ilkay Gündogan and Phil Foden replaced Bernardo Silva and Rodri in midfield.

Olympiakos arrived as the Greek champions who had scored only once and won once – against Marseille. City’s familiar 4-1-4-1 was a nominal shape as Foden, Raheem Sterling and Riyad Mahrez joined Torres, the central striker, to make an attacking quartet throughout the opening half.

Foden was the recipient of a Kyle Walker ball after the right back’s pace was too much for José Holebas. Foden laid off to Mahrez and won a first corner for City. This led to a second when the Algerian’s delivery was backheeled niftily by Torres and deflected out of play.

Even though nothing material derived from this sequence City were already swarming all over their visitors, the ball being pinged around at will, as when Gündogan chipped towards Sterling and Olympiakos were fortunate no teammate was found.

What they did not require was Rúben Semedo to dribble near his penalty spot and run straight into Kevin De Bruyne. This time Pedro Martins’s side escaped but moments later they did not. Gündogan tapped to Mahrez and he passed inside to Torres. A quick one-two with De Bruyne and the Spaniard was in and firing past José Sá for his third strike in three Group C appearances.

Olympiakos were already befuddled. Possession was scarce and ill-used when it occurred as when Mathieu Valbuena had a chance to cross but spooned the ball into Ederson’s hands. Stones and Aké, who was making his Champions League debut, were spectators called upon occasionally to trade passes before allowing Gündogan, Foden and De Bruyne to move the side upfield.

Better came from Olympiakos when Valbuena, his radar adjusted, floated in a teaser for Lazar Randjelovic to run on to – Ederson managed to collect but it was marginal. Torres, though, was proving irresistible.

Quality teemed through City as a whole. Theirs was an exhibition of percussive passing that echoed around the empty stadium as Olympiakos watched on helpless. Sterling beat Sá but was ruled offside and so City’s supremacy still had only the opener to show for it. A Zinchenko-Mahrez-Foden sequence ended with the ball fizzing at Sá but once more the Greeks did not concede.

Guardiola, then, was frustrated at his team’s slender lead as the second half kicked off.

And he will also have been conscious of his side’s vulnerability to the quick smash-and-grab raid that was the main hope for Olympiakos. Yet it was from a rare corner lifted in by Valbuena that had City’s rearguard creaking – Mady Camara rising to head, though not on target. City’s high-octane game had dissipated and instead they had become sloppy, Mahrez’s loss of possession when carrying the ball forward sending Guardiola sinking to his haunches.

The home team’s loss of focus was evident when, before his goal, Foden blundered by hitting a pass blindly to Stones only to find Valbuena, who should have done better from close range.

This had the Olympiakos bench disappointed but the Greek side were firmly in the contest. The next moment of panic came from a Camara cross that went to an unmarked Youssef El-Arabi, but he failed to control.

The stability Guardiola craves in his side had vanished. Gündogan should have restored it via a chance from 20 yards but the ball went blasted over. City were laboured, appearing as fatigued as they had previously been ebullient.

Jesus’s introduction for the closing phases was welcome. As was the Torres ball towards the Brazilian that came close to creating a second. Olympiakos still threatened sporadically. A Holebas surge took him beyond Walker but he did not trouble Ederson. Yet at the other end De Bruyne joined Torres on a break, collected the latter’s pass though he unloaded a shot into Sá’s hands.

With around 10 minutes remaining De Bruyne turned provider. His pass was taken by Jesus and, after a shimmy, the No 9 smashed into the roof of Sá’s net. A spectacular long-range strike from Cancelo late on put a pleasing gloss on the result for City. – Guardian