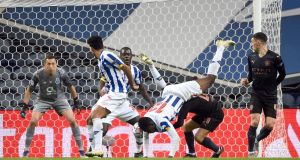 Manchester City are Group C winners, courtesy of a draw in which Porto were toyed with but could not be killed off due to a lack of ruthlessness from Pep Guardiola’s side.

This was summed up in the closing stages when Rúben Dias somehow hooked the clear ball of the Porto goalline when scoring looked easier for the Portuguese. Still, City’s manager can be pleased: this is a slick qualifying campaign and the final match is now reduced to a non-event, allowing Guardiola to focus on domestic affairs until the knockout phase begins.

Guardiola’s seven changes from the weekend win over Burnley did not include Ferran Torres, who again operated in the Champions League at No 9 with Gabriel Jesus being stood down toon the bench.

Given the needle during and after the reverse fixture between Guardiola and Porto’s Sérgio Conceição eyes were on the touchline as well as the pitch. While there were no contretempts to report in the first half, on the field City were confident - Phil Foden beginning by troubling Wilson Manafá and Chancel Mbemba along his left corridor, which encouraged Oleksandr Zinchenko, at left-back, to move into attack and link with the 20-year-old.

Foden’s delivery of a corner from the right, aimed at Eric García, won a second kick from the opposite quadrant. Foden trotted over to take and though the Portuguese champions survived they were to remain under pressure. When Zinchenho found the razor-sharp Foden close to Agustin Marchesín’s goal the youngster was oddly unaware, the ball bouncing off him to safety for the home team.

Porto’s first foray into City territory occurred when García’s loose pass allowed Zaidu Sanusi to rove along the left and a further warning came down the other flank when Otávio ran onto a chip and Ederson had to rush out to snuff the danger out. This signalled a shift in the contest, Porto on equal terms, no longer pinned back near their goal.

And they gave City a real scare when Diogo Leite’s flick from a long throw had to be saved low by Ederson.

Porto were turned due to a rapid counter-attack from the visitors. Bernardo Silva led the break, feeding Foden, the youngster’s instant pass from the left rolling precisely into Torres’s path. He advanced towards Marchesín but the home No 1 smothered the Spaniard’s shot. City again asserted themselves. Rodri, João Cancelo, Silva and Fernandinho tapped the ball between them until suddenly Silva was fashioning a Rabona towards Torres and Marchesín again had to scramble the ball away. A flurry of chances ensued, Raheem Sterling looked to be clear but Malang Sarr hooked the ball away - the resulting corner saw Sanusi clear off the line from Sterling.

This was the opening period in microcosm: for all their dominance City could not apply the killer touch - as, with the interval approaching, was again illustrated when two Zinchenko balls into the area were not finished off, and efforts from Rodri and Fernandinho failed to beat Marchesín.

As the second half kicked off a telling statistic was how Porto’s keeper had had more touches than any outfield colleague.

Cancelo was first to show with a feint but his cross disappointed. When, at the other end, Sérgio Oliveira pulled the trigger and Ederson had to make an actual save here was a reminder of how scant any shots on target had been .

Zinchenko’s 30-yard free-kick that went straight into Marchesín’s hand was another as, now, a little niggle between the sides occurred, Mateus Uribe shoving Silva over, Rodri having earlier been booked for a wild elbow.

Finally, City had a clear chance. Sterling ran on to a Foden pass but could not beat the defiant Marchesín, then Torres dawdled over the rebound. It meant as the hour mark passed the contest remained goalless and City were vulnerable to a smash-and-grab.

Dias’s miss came when Fernandinho sliced the ball to Sterling who moved it on only for the centre-back to make his inadvertent clearance, Torres’s follow-up overhead kick also failing to register.

Gabriel Jesus had a late strike disallowed for offside in the build-up but this was immaterial. - Guardian