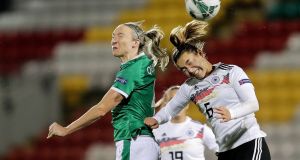 Vera Pauw says she believes Ireland will qualify for the next World Cup unless the team is desperately unlucky with the draw but the 57-year-old will speak with the FAI about her own future then return home to discuss the situation with her partner before deciding on whether she should be the woman who tries to take them there.

The former Dutch international was clearly proud of the team’s performance against a German side that had, at least, to work hard through the second-half for their victory in Tallaght and despite the enormous disappointment of the defeat in Kiev last month, Pauw is adamant that the team she inherited just after the start of this campaign has improved to the extent that they no longer fear facing the game’s best sides.

“We’re a year further down the line and we’re not afraid of any opponents,” she said shortly leaving a dressing room where Katie McCabe had told her teammates that this marked the start of the side’s journey rather than the end. “This bunch has such a huge future,” said Pauw. “They have grown in every session. I don’t think there is another team that has grown like them during the pandemic. We don’t know where the ceiling is.

“I hope we made Ireland proud,” she continued. “But the ceiling is not there. This team will be at the World Cup 2023 if the draw is not too hard.”

As to whether Pauw might be there with them, she seemed a little less certain.

“This is not the moment to decide,” she said. “First, we must see if the FAI wants me to extend my contract. Then there is my private situation. I’ll go home, discuss it with my partner (former Netherlands coach, Bert Van Lingen). But my feeling in there, is yes. I need to rest and get the emotions down but my heart is fully with this team.”

Several players expressed the hope that Pauw will stay on, including Louise Quinn who made clear that whatever happens with the coach, she hopes to be a part of the next World Cup campaign herself.

“Oh, I hope so. Jesus, I’m not getting rid of these jerseys any time soon,” the 30-year-old said, gently patting the crest. “Plenty more caps hopefully. That’s my intention. They’re big legs and I still think there’s a lot in them.”

Here, she believed, there was certainly a lot to take heart from as Ireland chased a game they started as massive underdogs and but competed fiercely in for spells, especially late on, when the defender found herself thrown forward to join the Irish attack.

“We went out there with the intention to beat the Germans,” she said. “It was the only way and we knew we had to put it all out there. It didn’t happen tonight but we tried our best. If you don’t throw the kitchen sink at it, I think that’s where the regrets will come from but I think that’s really what we did.

“I thought how we approached the Germans was fantastic. But we’ve got to think about the campaign as a whole and just build. The World Cup qualifiers. . . it’s a really, really tough ask but I think we’re going to go in with far more confidence now.”