Leicester must bide their time after dull draw in Copenhagen 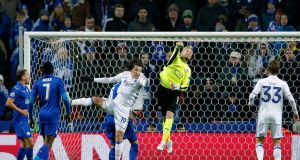 It was one of those nights when the Champions League music played loud and clear but no one danced to the tune. The entertainment on the pitch did nothing to warm the hearts of the supporters on a chilly night in the Danish capital as Leicester were made to wait for the chance to confirm their place in the last 16.

Claudio Ranieri’s side now need one point from their final two matches to guarantee a place in the knock-out stage and it would be a major surprise if that landmark moment failed to arrive at home against Club Brugge in a little under three weeks’ time.

They never did enough to pick up the win that would have got the job done here, where FC Copenhagen restricted Leicester to few opportunities and extended their unbeaten home record to 31 matches. For Copenhagen, however, this was two points dropped in their pursuit of the other qualification spot in Group G and once again they were left cursing Kasper Schmeichel, the hometown boy.

As with the game at the King Power Stadium last month, the Leicester goalkeeper produced a brilliant 90th-minute save to deny Andreas Cornelius, who towered above Wes Morgan to connect with a downward header that Schmeichel did extremely well to keep out at his near post.

There was quite an atmosphere inside this compact 38,000-seater arena and the early signs suggested that Copenhagen were intent on making life as uncomfortable as possible for Leicester. Leicester did not exactly help themselves at times, in particular during an opening half an hour littered with mistakes. Throwing his arms around on the touchline, Ranieri looked totally exasperated with what he was seeing.

The manager had sprung a surprise with his team selection, with Jeff Schlupp preferred to Shinji Okazaki and Ahmed Musa initially deployed in a more central role, rather than his preferred position out wide. It seemed like a strange way to set the team up and there was little sign of any cohesion up to the interval. At one point Ranieri called Jamie Vardy over for a long chat during a stop in play to get a message across to Riyad Mahrez on the far side of the pitch and another lengthy conversation ensued between the two players. It was a bit of a mess.

Every bit as worrying for Ranieri was the sight of Morgan and Robert Huth making the sort of errors that on another evening could have proved so costly. Neither centre half is especially comfortable in possession – rugged, uncompromising defending is their forte – and that weakness with the ball at their feet was exposed twice in the space of six first-half minutes.

Morgan was the first to get caught out when he gifted the ball to Federico Santander about 40 yards from goal, yet the Paraguayan, after running into the inside-left channel and breaking into the area, shot tamely at Schmeichel. Huth’s faux pas left the German with little option but to bring down Santander as the striker threatened to break free, prompting Felix Brych, the German referee, to brandish a yellow card. Danny Drinkwater and Luis Fernández were also booked in a scrappy first half.

With Leicester unable to retain the ball for any period of time, the invitation was there for Copenhagen to take control of the game, yet a lack of conviction further forward prevented them from capitalising.

Santander headed a deep cross from the left back, Ludwig Augustinsson, over the bar and Morgan, doing what he does best, got across to block Benjamin Verbic’s shot after a fine pass from Thomas Delaney opened up space on the Copenhagen left.

As an attacking force, Leicester were almost non-existent, although it was a measure of how toothless Copenhagen were up front that Schlupp’s low, deflected drive, which rolled harmlessly into the arms of Robin Olsen, was the only shot on target in a hugely disappointing first half.

Recognising the need to change things, Ranieri tweaked the formation, moving Mahrez into a more central role and sliding Musa wider. Things got a little better for Leicester as they began to play with more belief and dictated the direction of the game for a period. Drinkwater escaped on the right and slid a low centre across the six-yard box to the gasps of the 3,400 travelling fans behind that goal.

Copenhagen’s threat was sporadic, although Peter Ankersen, the right back, looked dangerous. Ankersen had one shot blocked by Christian Fuchs and blasted another, after space opened up invitingly in front of him, over the bar. Verbic’s 18-yard effort ended up in a similar place after Youssef Toutouh crossed from the left and the ball ran through to the unmarked winger, who should have done better.

There was another reprieve for Leicester when Augustinsson delivered a low centre that Verbic met first time only for Schmeichel to smother at his feet. Leicester’s goalkeeper then made an even better stop to thwart Cornelius late on.