Marca, AS, Sport and Mundo Deportivo all say Setién’s time is up 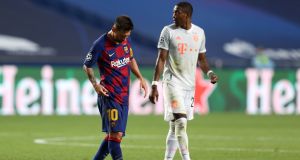 The Spanish press reported on a night of “shame” and “humiliation” for Barcelona and claimed there was no way back for boss Quique Setién following their Champions League capitulation at the hands of Bayern Munich.

Marca, AS, Sport and Mundo Deportivo said Setién’s fate was sealed just seven months into the job in the wake of Friday night’s 8-2 quarter-final annihilation in Lisbon, the club’s heaviest European defeat, and named former Tottenham manager Mauricio Pochettino as one of the front-runners to succeed him.

“Shame” was Marca’s one-word front-page headline above a picture of a dejected-looking Luis Suárez and Lionel Messi. The newspaper said Setién already had “a foot and a half” out the door after the “historic humiliation”, while also pointing out Spain was without a Champions League semi-finalist for the first time in 13 years.

AS and Sport both opted for “historic humiliation” along with pictures of talisman Messi contemplating perhaps the lowest moment of his glittering career. AS said the Bayern “disaster” would have “unpredictable consequences that reach all levels of the club”, while Sport said the five-time European champions had been “ridiculed”.

“Shameful end of an era,” read the headline in Mundo Deportivo, which said there was “no carrying on” for Setién. The papers also carried the quotes from defender Gerard Piqué demanding change and president Josep Maria Bartomeu promising it.

Their websites named Pochettino, out of work since being sacked by Spurs last November and a former boss of Barça’s local rivals Espanyol, as one of the leading contenders to replace Setién. The former Barcelona midfielder Xavi, who is in charge of Al Sadd in Qatar, and Ronald Koeman were also said to be in the running.