Liverpool director of public health concerned at number of cases 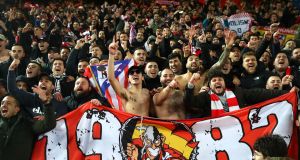 Liverpool’s Champions League tie at Anfield with Atlético Madrid should not have been played, the city council’s director of public health has said, amid concern at the rising number of confirmed coronavirus cases there.

Matthew Ashton, who began in the role on Wednesday, is responsible for co-ordinating the response to the unprecedented challenges of the pandemic while having to work from home, as confirmed cases in Liverpool rose to 262.

“It was not the right decision to stage the match,” Ashton told the Guardian, although he said he was not critical of the scientists or medical officers whose advice informed the government’s approach of allowing sporting events to continue. People don’t make bad decisions on purpose – perhaps the seriousness of the situation wasn’t being understood across government at that time.

“Although we will never know, the Atlético Madrid game could have been one of the cultural events and gatherings that influenced the rise in Liverpool. It is definitely one to be included on the list for learning and for a future inquiry, so that organisations can learn and not make similar mistakes.”

On March 11th, the day of the last-16 second-leg match, which was won 3-2 by Atlético and attended by 54,000 people, including 3,000 away supporters, Liverpool had just six confirmed cases of coronavirus. Madrid had by then become a centre for the spread of the virus.

La Liga decided that day that all matches must be played behind closed doors and Spain’s government had ordered schools closed the day before. In Britain the government was still pursuing its policy of allowing life to continue with no restrictions other than advising people who believed they had Covid-19 symptoms to self-isolate.

Dr David Halpern, chief executive of the governmental behavioural insights team, first publicly mentioned the term “herd immunity” that day, suggesting that the majority of the population could be allowed to contract Covid-19 while people most vulnerable to the virus might be isolated.

All major events such as football matches, described as “mass gatherings”, were still scheduled to go ahead. The government changed the policy and began to announce social distancing restrictions the following Monday, March 16th.

Joel Rookwood, a senior lecturer in sport business management at the University of Central Lancashire, and a Liverpool supporter, has been suffering severely from the symptoms of Covid-19 since March 14th, although he has not been in hospital so has not been tested for the virus. He was at the Atlético match, and believes he contracted the virus at the game.

Writing about his experience in his local newspaper, the Lancashire Evening Post, Rookwood, 39, said he had feared he would be vulnerable if he contracted the virus because he has twice been hospitalised with pneumonia.

For days since the match he has suffered from “acute shortness of breath and violent episodes of rigor (shaking). I haven’t eaten solid food or been fully horizontal for 10 days. Precious periods of sleep are counted in minutes, not hours.”

He did call 111 last weekend when his condition deteriorated, but was told he was 280th in the queue for an ambulance, and he was not considered critical enough for that to be accelerated.

Scientific advice to the government at the time of the match, and the way it was communicated by ministers, made a distinction between “mass gatherings” outdoors, which are said to involve a lower risk of infection, and people meeting inside, in pubs and bars, where the risk of transmission is greater.

That appeared to overlook the glaring reality that a mega-event such as Liverpool’s Champions League game involves multiple intense indoor gatherings as well; the old Victorian pubs around Anfield were packed for hours that night, as were the club’s bars, shop, concourses, toilets, entertainment and working areas. Even out on the Kop, Rookwood points out that on such a tumultuous football night there was a great deal of close contact.

Yet despite the pandemic beginning to take hold in Britain then, he recalls no allowances being made for it: “There were queues and groups everywhere. Pubs were packed, friends greeted each other with the customary contact, fans gathered in condensed queues and stood or sat together in close proximity . . . The celebrations that night were very physical, shared experiences.”

Prof Neil Ferguson, leader of the Imperial College team of scientists advising the government, said that their advice on mass outdoor gatherings did acknowledge that people would also gather indoors at pubs and bars.

“The issue is that people spend a very small amount of their time during the week at a mass gathering. It is not that mass gatherings don’t contribute at all [to the spread of a virus] but that at a population level, stopping them has a marginal impact.”

The issue of allowing Madrid supporters to travel was a separate government decision about restrictions from any particular country – which did not apply from Spain at the time, Ferguson said.

“Some people will have got infected,” he said of the transmission potential of mass gatherings, “and if it hadn’t happened they wouldn’t have been.”

However he maintains that stopping sporting events, rather than closing schools and maintaining the very restrictive measures now in place, would not have had “a major impact on the spread of the epidemic”.

Prof John Ashton, the former regional director of public health for north-west England – who is Matthew Ashton’s father – sounded the alarm about the government’s approach and staging the Liverpool match at the time and he maintains it was wrong to host it.

Accepting that without widespread testing the real number of Covid-19 cases is unknown, and it is impossible to be sure where people were infected, he says, nevertheless: “Bringing 3,000 supporters from a very high-incidence area was basically just wrong, and the view that open-air events don’t pose a threat is really simplistic. I hope I am wrong, but I believe that people were put in harm’s way that night.”