‘Dragon Slayer’ Slimani makes it two from two for Leicester

Foxes put domestic woes behind them on the continent 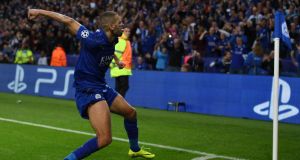 The script had been written for Islam Slimani and Leicester’s club-record signing followed it to the letter as the Algerian continued his remarkable goalscoring record against Porto to give Claudio Ranieri’s side an historical victory that puts them in a commanding position at the top of Group G.

Two games into the Champions League and Leicester already have six points on the board, with Slimani’s first-half header condemning Porto to yet another defeat on English soil. Porto have now lost 15 of their 17 matches in England and they could have been forgiven for thinking there was little chance of that run improving with Slimani on the pitch.

Nicknamed the “Dragon Slayer” during his time with Sporting Lisbon – Porto are known as the Dragões – Slimani took his tally to six goals in four games against the Portuguese club with a superb header. That sequence includes a goal against them earlier this season and it was no surprise that the man who arrived on transfer deadline day, in a £29m deal, left the field to a standing ovation when he was withdrawn eight minutes from time.

Presumably this is what Ranieri had in mind when he talked beforehand about “continuing the fairytale”. It was not straightforward for Leicester by any means and there were some nervous moments to endure in the closing stages, no more so than in the 83rd minute, when Jesús Corona, the Porto substitute, hit a right-footed volley that deflected off Marc Albrighton and cannoned off the near upright. Leicester, however, defended resolutely and held on to take another step towards the knockout stage.

It was a special atmosphere inside the King Power Stadium on a momentous occasion, with the Leicester players feeding off the energy of their supporters in a lively opening. The game was played at a frenetic pace – there were four yellow cards inside the first 31 minutes – with Leicester’s high-tempo approach and speed on the counter-attack troubling Porto time and again.

Slimani’s opening goal, however, came from a much more measured approach and involved a neat build up on the left, where Danny Drinkwater, Christian Fuchs and Albrighton exchanged passes before the latter, with a raking diagonal ball, picked out Riyad Mahrez on the left. Mahrez controlled the ball effortlessly before whipping in an inswinging cross that was almost impossible to defend. Jamie Vardy tried and failed to get a touch, but Slimani, who arrived in the six-yard box just behind his strike partner and ahead of Felipe, his marker, made no mistake as he headed past Iker Casillas.

The former Real Madrid goalkeeper was making his 158th appearance in the Champions League, which is more than double the total of the entire Leicester squad, and by now he has become wearily accustomed to picking the ball out of the back of the net when Slimani lines up against him.The Algerian had served a warning earlier in the game, when he headed Albrighton’s free-kick into Casillas’s hands, and it soon became clear that Porto were not comfortable defending the high ball. A long throw from Fuchs in the 10th minute caused consternation in the Porto area and Felipe was fortunate to avoid scoring an own goal when he nodded behind.

Vardy’s willingness to run in behind offered Leicester an outlet that stretched Porto, with Mahrez showing some nice touches and Slimani making his physical presence felt – the striker was booked for one slightly over-zealous challenge. A little deeper, Drinkwater was using the ball intelligently.

Porto, however, were very much in the game. Miguel Layún, their impressive right-back, looked dangerous whenever he broke forward. Exploiting the space that opened up behind Fuchs, Layún escaped on the right flank in the 11th minute and delivered a superb low centre that Adrián López was just unable to get a touch to as the ball slid across the six-yard box.

There was an earlier scare for Leicester when Óliver Torres released André Silva behind Wes Morgan and Kasper Schmeichel dashed from his line. André Silva got to the ball first but his attempted lob landed just the wrong side of the post. The same was true of Layún’s 25-yard free-kick later in the half, which skimmed the sidenetting with Schmeichel frantically trying to make up ground and cover his near upright.

Leicester, in other words, could not afford to take anything for granted. Nuno Espírito Santo, Porto’s coach, made two changes just after the hour mark, with Leicester looking more in control of the game at that point. Daniel Amartey, alongside Drinkwater in central midfield, was snapping into tackles and becoming more influential while further forward Mahrez always looked like making something happen. His low 20-yard shot was clawed around the post by Casillas.

Porto, though, continued to push for an equaliser. Diogo Jota, with the angle against him, saw his shot deflected off Morgan and two minutes later Héctor Herrera hit a 30-yard volley, after Leicester could only half-clear a corner, that Schmeichel did well to turn behind. Then came that late Corona shot that flashed past Leicester’s keeper and hit the woodwork.

1 US prosecutors say Russia and Qatar bribed Fifa officials in World Cup bids
2 Conor McDonald: ‘People in fitness industry need to be careful what they put online’
3 Tottenham players reminded of responsibilities over public workouts
4 Irish racing would need no more than 10 days to start up again
5 Share your favourite sporting moment and win a sports voucher
Real news has value SUBSCRIBE