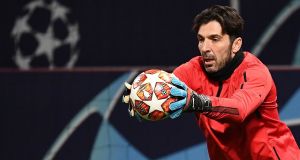 When Paris Saint-German signed Gianluigi Buffon last summer in the hope that he could help satisfy their craving for Champions League success, it looked like a move that illustrated why the French club will never be European champions under their Qatari regime.

It was not because the Champions League is the one major trophy that Buffon has never lifted but because PSG already had a gifted goalkeeper, Alphonse Areola, whose progress would be impeded by the club’s incorrigible star-hugging. Is it not ludicrous that the 25-year-old Areola will be parked on the Old Trafford bench on Tuesday while PSG take on Manchester United with a goalkeeper who is more famous but has just turned 41?

Yes, but then again maybe not. Because the strange policy that PSG introduced after Buffon’s arrival – alternating between the Italian and the Frenchman, who will probably start the second leg – has pretty much worked so far. But the big tests are coming. There were plenty of doubters last summer, including PSG’s manager, Thomas Tuchel, who was not behind Buffon’s recruitment. Areola, meanwhile, considered leaving and, according to the Chelsea goalkeeping coach, Christophe Lollichon, was keen on moving to Stamford Bridge until the Londoners broke the world record to sign Kepa Arrizabalaga.

Areola’s frustration was understandable. He knew Buffon came with the expectation of playing regularly. The younger goalkeeper already had irritating experience of rotation, having spent much of the 2016-17 season swapping with Kevin Trapp before establishing himself last season as PSG’s undisputed No 1. Having been at PSG since the age of 13 and honed his skills during successful loan spells at Lens, Bastia and Villarreal, Areola had arrived where he wanted to be.

All that remained was for him to become No 1 for his country as well. In 2013 he was a teammate of Paul Pogba when France won the Under-20 World Cup – with Areola saving two penalties in the final’s shootout – and last summer he got a senior World Cup medal as back-up to Hugo Lloris. He had good reason to be confident of becoming their first-choice goalkeeper, and not just because of Lloris’s obvious decline. And then PSG went and signed Buffon. “His arrival reaffirms our will to always go higher,” hurrahed PSG’s president Nasser Al-Khelaifi in July, presumably as Areola silently swore.

At least Areola was reassured by the manager. Tuchel recognises the need to give PSG true cohesion to become than the sum of shiny parts. He sees Areola as key to this. “He comes from the academy, PSG is everything for him,” Tuchel said in September. “And he absolutely wants to prove himself to PSG. This is a situation that must be respected and capitalised on. We must be proud to have players of this nature. We need the type of players who have the soul of PSG, who embody the club.”

But Tuchel also believes he must play Buffon. Goalkeeping duties have been split equally between the pair, with both playing exactly the same number of domestic and European matches this season. Areola appears to have come round to seeing his job-share with Buffon as the final stage of his development: rather than leave, he signed a new five-year contract in December even though Buffon’s deal, which expires at the end of this season, is expected to be extended for another year. Eager to put on a united front, PSG arranged for them to answer questions together last week. “Having Gigi alongside me is nothing but beneficial,” said Areola of the competitor he now describes as a “big brother”. “I can make my career last several extra years if I work to the maximum and that is what I try to do with him by my side. He is humble and doesn’t look down on me. I’m always happy to come to training with him.”

Buffon elaborated. “I would like to share a little of my experience with him so that he knows how to handle certain situations in matches and beyond. He is good, sometimes very good, and I would like him to become even better. I hope to give him that.”

That hints at the lingering flaw in Areola’s game – a propensity to make mistakes out of nowhere. His lapses are far less frequent than two years ago, when his errors were the chief reason why the less talented Trapp got so much game time, but they have not been eradicated. Ole Gunnar Solskjær presumably saw that when he watched PSG at Lyon this month. Areola made several superb saves – including two with his feet, an aspect of goalkeeping in which perhaps only Manchester United’s David de Gea is better – but he was at fault for Lyon’s first goal, getting lost under a cross as Moussa Dembélé outjumped him.

If Areola plays in the second leg it will be his first Champions League appearance since October. Buffon has played PSG’s last three matches in the competition, Areola given the first three partly because the Italian was suspended following his sending off after Juventus’s quarter-final defeat by Real Madrid last season.

It took a while for Buffon to digest that loss, brought about by a last-gasp penalty awarded by Michael Oliver. “In the place of a heart he has a rubbish bin,” the Italian railed immediately after that game, almost suggesting he thought the referee should have been more lenient because it quashed Buffon’s last chance of winning the Champions League. Or so it seemed at the time. Now Buffon returns to Old Trafford, where he lost to Milan in the 2003 final, the first of his three falls at the last hurdle.