Celtic rescue a point against Inverness 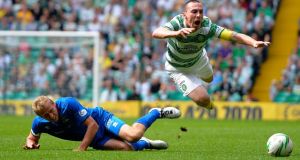 Celtic fought back from two goals down to claim a 2-2 draw against leaders Inverness in an entertaining tussle at Parkhead.

The Highlanders raced into the lead thanks to goals from Aaron Doran and Richie Foran, before being pegged back by Charlie Mulgrew and Adam Matthews.

Neil Lennon’s men must now stage another comeback and overcome another two-goal deficit to rescue their Champions League play-off when Shakhter Karagandy come calling on Wednesday.

Administration-hit Hearts continued to defy the odds as 17-year-old substitute Jordan McGhee headed a late winner in the 2-1 victory against Aberdeen.

Hearts were leading through Jamie Walker’s 18th-minute strike before referee Alan Muir adjudged Kevin McHattie to have fouled Calvin Zola in the box midway through the second half and showed him a straight red card.

McHattie looked to have won the ball, although he had his hands on the Dons substitute, and Hearts looked to be in danger of losing after Niall McGinn converted the penalty.

But they rallied again and McGhee headed home at the back post in the 88th minute to cut the Edinburgh club’s initial 15-point penalty further down to leave them on minus eight.

Aberdeen boss Derek McInnes and Hearts assistant manager Billy Brown were ordered off in the aftermath of the goal with the latter then involved in an angry exchange with Dons counterpart Tony Docherty.

Liam Craig provided under-fire Hibernian boss Pat Fenlon with a welcome gift as his double finally secured the Easter Road side their first win of the season in a 2-1 victory at Kilmarnock.

The hosts looked set to heap further pressure on the Irishman after Barry Nicholson smashed home a spectacular opener after 22 minutes.

But Craig ensured Hibs would secure their first win since beating Dundee 1-0 on May 18 with his second-half brace.

Jackie McNamara’s side celebrated victory in the Tayside derby after racing into a 3-0 first-half lead against Tommy Wright’s lacklustre visitors.

Goals from Keith Watson, David Goodwillie and Gary Mackay-Steven before the break put the outcome beyond any doubt before midfielder Stuart Armstrong completed the rout with their fourth after 52 minutes.

Ross County answered the critics with a 3-0 victory over St Mirren at Global Energy Stadium.

The final scoreline reflected County’s dominant display with a stunning strike from Stuart Kettlewell and a Richard Brittain double - one from the penalty spot - completed a satisfying afternoon’s work from the home side.

John Sutton scored the only goal of the match at Fir Park to earn Motherwell their first home win of the season and halt Partick’s unbeaten start to the campaign.

A fine second-half performance from Alan Archibald’s visiting side put Motherwell under pressure and meant Partick could consider themselves unlucky to leave with no reward.