Celtic maintain 100 per cent record with win over Aberdeen 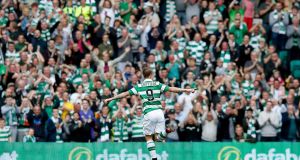 Celtic rounded up a fine week sitting top of the Scottish Premiership with a convincing 4-1 win over Aberdeen at Parkhead.

Hoops hit-man Leigh Griffiths opened the scoring in the 13th minute with a storming 20-yard shot before striker Adam Rooney levelled in the 33rd minute in a rare Dons attack.

Midfielder James Forrest, however, restored Celtic’s lead in the 42nd minute and with three minutes remaining Scott Sinclair grabbed the third with a penalty with Dons defender Mark Reynolds sent off for picking up a second yellow card after bringing him down, before midfielder Tom Rogic added the last-gasp fourth.

Brendan Rodgers’s side went into the game on a high after qualifying for the Champions League for the first time in three years with a 5-4 aggregate win over Hapoel Be’er Sheva on Tuesday night before drawing Barcelona, Manchester City and Borussia Monchengladbach in their section.

After the international break, Celtic will host Rangers for the first time in four years – the Hoops leapfrogged the Ibrox men at the top by a point and with a game in hand – before travelling to the Nou Camp for the first of their Group C games.

It is exciting times at Celtic Park.

Rodgers dropped goalkeeper Craig Gordon and gave a debut to 35-year-old Dorus de Vries who recently signed a two-year deal from Nottingham Forest, having worked with the Hoops boss at Swansea.

Defender Erik Sviatchenko and midfielder Rogic came in to the starting line-up at the expense of Saidy Janko and Callum McGregor. Defender Ash Taylor and striker Wes Burns returned to the Dons side with Miles Storey on the bench and Peter Pawlett out with a groin strain.

Following an early attempt by Burns which flew high and wide, Celtic took control, showing no signs of fatigue from the midweek trip to Israel.

In the 11th minute Rogic crashed a left-footed drive off the crossbar with Anthony O’Connor’s mis-kicked clearance from the rebound gratefully gathered by Joe Lewis.

However, the Dons goalkeeper was not so lucky two minutes later when Griffiths slipped the ball through the legs of Pittodrie midfielder Kenny McLean before unleashing a vicious left-footed drive from 25 yards which flew in off the post.

The Scotland striker then ran the length the park to hold up a t-shirt with ‘RIP Kieran’ on it, in tribute to teenage Celtic fan Kieran McDade who died while training with his local team in Coatbridge last week.

The home side grew in confidence and Forrest missed the target from a Sinclair cut-back when it looked a certain goal.

In a rare attack the visitors levelled.

Former Celt Niall McGinn slipped past right back Mikael Lustig near the by-line and when his cross was cut out by defender Kolo Toure, Rooney reacted quickly to turn and curl the ball into the far corner past De Vries.

The goal surprised the home side but three minutes from the break Rogic picked out Forrest inside the box and the Scotland international, with the outside of his right foot, sent the ball hurtling past Lewis.

With the last kick of the half Griffiths came close with a low drive and eight minutes after the break Sinclair’s goal-bound drive was deflected by Taylor for a corner which was desperately scrambled clear.

Celtic finished strongly and in the 87th minute Reynolds, booked minutes earlier for a foul on Rogic, bundled Sinclair to the ground as he went through on goal with referee Bobby Madden sending him packing.

The Hoops winger forward drove in the penalty before Rogic put the icing on the cake with a 20-yard drive in the 90th minute.