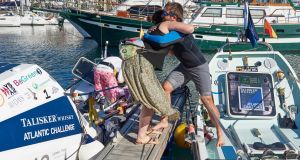 Gavan Hennigan hugs his sister before setting off in the Talisker Whisky Atlantic Challenge from the Canaries to Antigua. Photograph: Ben Duffy/PA

It is almost 20 years since Eamonn and Peter Kavanagh competed in the first Atlantic rowing race – they took 58 days – and Irish involvement has been a regular and often newsworthy feature since.

There were two Irish crews in the 2005/2006 race, with Paul Gleeson teaming up with Canada’s Tori Holmes to complete the race, while Olympian Gearóid Towey and Ciarán Lewis were rescued at sea after a capsize.

Right now, Ireland has one of its best competitors.

Gavan Hennigan is in his 16th day at sea, but the Galway man has taken to the race with such a mixture of gusto and expertise he seems made for the challenge.

He is making excellent progress and sits at number three of 12 boats and is already a third of the way from the Canaries to Antigua. He is projected to finish in 53 days and seven hours.

Veterans of the race agree that the ability to cope with the surprises thrown up by the ocean and the fortitude to maintain balance on being alone for long periods are crucial.

In his blog (gavanhennigan.com), he makes light of the big waves and high winds.

“A lot of the fleet had never experienced seas like this but I’ve been all over it, catching huge rollers and maxing out at 12 knots flying down the face of these ocean swells, it was hugely exhilarating.”

He is a trained paramedic and has been treating his own cuts.

To get him through lonely nights, he has been relying on messages of support from Ireland; he is blasé about missing out on current affairs – as long as he knows the Connacht rugby results. And he is enjoying his time at sea and, most recently, the thrill of being amongst a pod of dolphins.

For a time in his youth, Hennigan had serious drug and alcohol problems. Now he hopes to collect thousands of euro for Jigsaw Galway and Cancer Care West.

Elsewhere, a big group of top Irish rowers headed off on Thursday to Spain. They will be based in Seville until January 15th.

The warm-weather training camp has become a fixture in the schedule – it played a major part in laying the groundwork for the marked improvement in the form of Paul and Gary O’Donovan in 2015/2016.

The athletes have a target to hit: the Irish Indoor Championships in Limerick on January 21st are mandatory for those in the high performance programme. Big improvements in times are expected.

Cricket Australia boss casts doubt over ‘high risk’ T20 World Cup 08:41
Boston Marathon cancelled for the first time in 124-year history 08:00
Premier League to restart on June 17th, Andy Farrell on lifting the Monday blues 07:43
Anfield and Cheltenham show sports again lacking in looking after their own 07:00
Louise Galvin’s rugby career on hold for work on the frontline 06:30
Here is your handy guide to sport on television this week