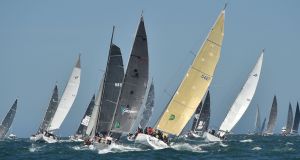 Competing yachts sail out of Sydney Harbour at the start of the Sydney to Hobart Race on St Stephen’s Day. Photograph: Getty.

The tide turned against two Irish sailing campaigns in the Tasman Sea this week just as it looked like both were on the cusp of major international offshore achievements.

On Wednesday, Howth Yacht Club’s Gordon Maguire lost the overall handicap lead in the Rolex Sydney Hobart Race and on Thursday Enda O’Coineen’s Vendee Globe entry was hit with a serious setback on day 52 of the race, just as the Irish debutante was fighting for a top-ten place in the standings of the solo round the world race.

Having led overall for 24 hours, Maguire, as sailing captain on Matt Allen’s Ichi Ban, had to sail the final 60 miles of the 630-miler in six-and a half hours, a feat that proved impossible in increasingly calm conditions. In the end, the overall winner was the Volvo 70 Giacomo, and thanks to those Hobart calms, Maguire ended up fifth in the 67-boat IRC fleet.

A sailor with Irish roots Adrienne Cahalan, one of Australia’s top yachtswomen and a former Irish Olympic sailing team meteorologist, arrived in Hobart aboard the Brenton Fischer skippered TP52 Ragamuffin, cementing her place as the first woman ever to compete in 25 Sydney Hobart Yacht Races.

Elsewhere in the race, Dún Laoghaire’s Barry Hurley and Kenneth Rumball racing on the Australian First 40 Breakthrough were 15th overall in Division three.

After 52 days at sea, O’Coineen deems it a prudent, but tough, decision to turn back north in the race and separate away from the six-strong pack of boats he had been racing closely with.

The Galway Bay sailor, who was lying in 11th place of the 19 solo skippers still racing, is seeking to complete a number of repairs, and aims to continue with his race. None of O’Coineen’s problems aboard Kilcullen Voyager, in isolation, are considered race ending in themselves, but together they might endanger him during the 5000 miles between New Zealand and Cape Horn.

Following the rules and spirit of the race, the intention of the Irish solo sailor is to complete his repairs unassisted and to continue racing.

“The self steering system has to be recalibrated. The software is corrupted. I have to go to flat water. That is the first thing. At the spreader level I have a piece of the mast track which is broken about 18 inches (45cm). The third main thing is when my reef broke I crash gybed and the lazyjacks broke. So to replace the mast track I have to climb the mast. I am making progress with the comms. So none of them alone is life threatening but the accumulation together is all pretty serious,” he said via satellite phone to race headquarters in Paris.

At home, In a new year boost to next summer’s regatta season, over a quarter of the expected 400-boat entry have already entered July’s Volvo Dún Laoghaire Regatta on Dublin Bay.

The biennial event is staged by all four Dún Laoghaire waterfront clubs staged on the bay since 2005. Among the 111 boats already signed up is a healthy selection of cruiser racers across all four rating divisions coming from a range of Irish Sea sailing centres