85-year-old marathoner is so fast even scientists marvel 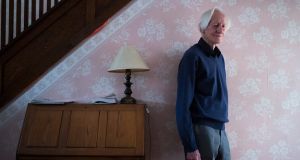 It was a day for talking, not running. Snow was piled along the streets. The driveway was icy. Ed Whitlock’s shoulder hurt. His face had been puffy. He did not feel well enough for the cemetery.

At a visitor’s urging, Whitlock showed his display of novelty trophies. A beer can for winning a series of races as a 60-year-old. (“There’s still beer inside!”) A coffee mug for becoming the first (and still only) person older than 70 to run a marathon in under three hours. A baseball for throwing out the first pitch at a minor league game.

“It bounced three times to the catcher,” Whitlock said a few days before Christmas. “My arm is terrible.”

It is not his arm, but his legs and lungs that have made him a scientific marvel and octogenarian phenom. In October, at 85, he set his latest distance-running record, completing the Toronto Waterfront Marathon in three hours 56 minutes 34 seconds and becoming the oldest person to run 26.2 miles in less than four hours.

Having set dozens of age-group records from the metric mile to the marathon, Whitlock remains at the forefront among older athletes who have led scientists to reassess the possibilities of ageing and performance.

“He’s about as close as you can get to minimal ageing in a human individual,” said Dr Michael Joyner, a researcher at the Mayo Clinic who has studied performance and ageing.

Whitlock’s career has been as unorthodox as it is remarkable. For starters, he trains alone in the Milton Evergreen Cemetery near his home outside Toronto. He runs laps for three or three and a half hours at a time, unbothered by traffic or the eternal inhabitants or the modern theories and gadgets of training.

At the Toronto Marathon, he raced in 15-year-old shoes and a singlet that was 20 or 30 years old. He has no coach. He follows no special diet. He does not chart his mileage. He wears no heart-rate monitor. He takes no ice baths, gets no massages. He shovels snow in the winter and gardens in the summer but lifts no weights, does no sit-ups or push-ups. He avoids stretching, except the day of a race. He takes no medication, only a supplement that may or may not help his knees.

What he does possess is a slight build: He is five feet seven inches and weighs eight stone. He also has an enormous oxygen-carrying capacity; an uncommon retention of muscle mass for someone his age; a floating gait; and an unwavering dedication to pit himself against the clock, both the internal one and the one at the finish line.

“I believe people can do far more than they think they can,” said Whitlock, a retired mining engineer who was born in greater London and speaks with British self-deprecation. “You have to be idiot enough to try it.”

Four years ago, at 81, Whitlock underwent a battery of physiological and cognitive tests at McGill University in Montreal. One of the tests measured his VO2 max, the maximum amount of oxygen that can be consumed and used by the muscles during exercise. It is measured in millilitres of oxygen per kilogram of body weight per minute. The higher the number, the greater a person’s aerobic fitness.

A top Olympic-level cross-country skier might have a VO2 max of 90, compared to 20 for those living independently in their 80s. Whitlock’s score was an exceptional 54. That is roughly equivalent to someone of college age who is a recreational athlete, said Russell Hepple, an exercise physiologist who performed the tests on Whitlock at McGill with his colleague and wife, Tanja Taivassalo.

A VO2 max reading of 54 appears to be unsurpassed for people tested in their 80s, said Scott Trappe, the director of the human-performance laboratory at Ball State University in Muncie, Indiana, who has studied Swedish cross-country skiers who continued to perform at high levels into their 80s and early 90s, including 1948 Olympic champion Martin Lundstrom.

“There’s nothing higher than that in the literature,” Trappe said of Whitlock. “It’s phenomenal physiology.”

At McGill, Whitlock also underwent imaging and biopsy testing of his muscles. The smallest functional entity of muscle is called a motor unit, which consists of a neuron and the muscle fibres it activates. The number of functioning motor units declines with age.

For example, a healthy young adult has about 160 motor units in the shin muscle, called the tibialis anterior, which helps lift the toes. In an octogenarian, that number could have declined to about 60 motor units, Hepple said, but Whitlock retained “closer to 100”.

This preservation might largely be explained, he said, by a chronically elevated level of circulating chemicals, called neurotrophins, which protect and nurture neurons, helping them survive.

“That’s a big advantage,” said Hepple, who has recently moved to the University of Florida and is continuing to analyse his study of Whitlock and other ageing athletes. “If you have more motor units, in the context of age, that would be reflected in better maintenance of muscle mass, which in turn would translate into better strength.”

Beyond genetics, there are other factors that surely have contributed to Whitlock’s stunning endurance, said Joyner of the Mayo Clinic.

He compared Whitlock to Joan Benoit Samuelson, the 1984 Olympic marathon champion who has continued to run sub three-hour marathons into her late 50s and has said she will attempt the extraordinary feat into her 60s.

Neither Whitlock nor Benoit Samuelson could be considered extroverts. Yet athletes like them who remain highly active as they age “haven’t killed off their inner 13-year-old,” Joyner said. He described them, in general, as curious, relatively unconstrained and full of “physical and emotional vigour,” not so different from the older aunt or uncle who insists on shooting squirt guns at family reunions.

“There are biological factors, I’m not naive about that,” Joyner said. “But the message with these people is not that they’re freaks. It is that a whole lot of ageing, with a bit of luck, is under some volitional control.”

Inevitably, though, even Whitlock has made some concessions to growing older. His weight before the Toronto Waterfront Marathon in October dropped to seven and a half stone, and he wonders whether he is experiencing some muscle wasting.

Adjusted for age, that race was the equivalent of a runner in his prime completing a marathon in 2:04:48, which is less than two minutes off the current world record of 2:02:57. Writing in The New York Times, the running journalist Marc Bloom said that Whitlock’s performance in 2004 may have made him “the world’s best athlete for his age”.

In 2016, he set another flurry of age-group records, including a half-marathon run in 1:50.47. But there were also more frequent interruptions in training – aches in his shoulder, knee, hip and groin. He was limited to 16 training runs of three hours for the most recent Toronto Marathon. His race pace of 9:01 per mile, while impressive, was nearly 2½ minutes slower than the 6:40 pace he ran at 73.

“When you get to my age, the rate of deterioration is accelerating,” Whitlock said. “I’m sure every year, every six months, make a difference. I don’t seem to be able to consistently train. Whether that’s a permanent situation, I’m hoping not.”

The next looming marathon record is for age 90 and beyond. Fauja Singh of England ran 5:40:04 at the purported age of 92 in 2003, but his mark has not been ratified because he has been unable to produce a birth certificate. Otherwise, statisticians list the age-group record variously as 6:35:47 or 6:46:34.

Asked why he kept running, Whitlock candidly said he enjoyed setting records and receiving attention. His approach remains pragmatic. He does not experience a runner’s high, he said, and does not run for his health. He finds training to be drudgery and even racing brings as much apprehension as joy.

“The real feeling of enjoyment,” he said, “is getting across the finish line and finding out that you’ve done okay.”