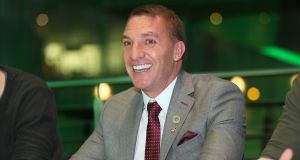 Celtic manager Brendan Rodgers: “The beauty is this is a group that likes each other. They communicate, they work hard.” Photograph: Stephen Davison

Celtic manager Brendan Rodgers claims there is no way his players will take their foot off the gas on their record-breaking run – because they are “allergic” to complacency.

The Scottish Premiership champions made it 63 unbeaten domestic games with a 4-0 victory over St Johnstone in Perth, overtaking the record set by Willie Maley’s Celtic side 100 years ago.

Celtic have not lost since Ronny Deila’s penultimate match in charge in May 2016 – also at McDiarmid Park – but Rodgers has achieved the consistency with a similar squad: nine of Saturday’s starting line-up were already at the club when the former Liverpool boss took over.

Rodgers has managed to instil a relentless approach to maintaining standards and he does not feel it will be difficult to avoid complacency.

“It’s fairly simple, it’s something I mentioned when I first came in: we need to be allergic to it and that’s something we have created to the 17th month of working together.

“I said it on the first day but it’s something we have dedicated our lives to every single day, and that excellence of always looking to be better.

“So this won’t affect them in any way. It’s important that they celebrate it. Any high-performing teams in sport, and football in particular, it’s important to celebrate what they have done. But they also know the levels we set every day.

“The beauty is this is a group that likes each other. They communicate, they work hard. You saw on Saturday, on a difficult surface, how comfortable and technical they were in taking the ball in situations and working their way through the pitch, and scoring great goals.

“But complacency is something we have trained to avoid, and it’s my job as the leader to ensure that it doesn’t come in.”

Celtic’s dominance was not reflected until the 72nd minute when Moussa Dembele added to Scott SInclair’s first-half goal.

Saints had created a couple of rare openings moments earlier, and Celtic seemed to be stung into moving up a gear.

Steven Anderson soon put through his own net after good work from Dembele and substitute Olivier Ntcham drove home a late fourth.

St Johnstone are also on a run but a far less welcome one. They have now not scored in six matches, and only taken one point in that spell.

However, they are seventh in the league, and manager Tommy Wright is determined to keep his players in a positive mood.

Wright said: “We’ve still got 15 points so you try and take the positives out of it and, to be honest, not read what is written about them and not listen to people who want to criticise them, because those people, with all due respect, can’t help them. The only people that can help them is me and the staff and the rest of the players.

“We are working hard. We are on a difficult run, we have had difficult runs before, and I believe the squad is good enough to get out of it and get back to winning ways.”

The sports fan would like to wake up now, thanks very much 06:00
Six Nations: Will Connors sets the backrow benchmark in Rome 06:00
Ken Early: Referees and VAR now thrust to centre stage 06:00
Craig Casey and Ryan Baird give a glimpse of Ireland’s future in Rome 06:00
Plenty for Farrell to muse on after encouraging display 06:00