Brady out of Faroe Islands qualifier 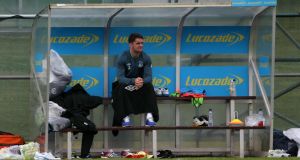 Robbie Brady is out of the Republic of Ireland’s World Cup qualifier against the Faroe Islands.

The Hull winger sat out training at Malahide this morning with a groin injury, and will return home tomorrow.

Assistant manager Marco Tardelli confirmed Brady’s impending departure, which will mean he misses next Friday’s qualifier and the friendlies against Georgia and Spain either side of it.

Tardelli said: “Robbie has a little problem and I think tomorrow, he will go back home. It’s not a very big problem, but it’s better he rests.”

Goalkeeper David Forde, who had his right knee heavily strapped yesterday, trained in the gym, but is unlikely to figure against the Georgians on Sunday, while full back Marc Wilson has recovered from a hamstring injury.

Tardelli, meanwhile, backed up Giovanni Trapattoni’s assertion that stars of the future like Brady will have to remain patient and learn their trade before they can follow in the footsteps of the the likes of Séamus Coleman and James McCarthy, who have cemented their places at international level.

Asked if there are more young players waiting to make the step up, Tardelli said: “I hope so for the Irish team because it is very important that the young players grow.

“In the under-21s, there are good players, but at this moment, it’s better for us to try the other players, like (Jeff) Hendrick.

“It’s very important that the team improves together, but not with too many young players because it’s not easy.

“We have young players – we have McCarthy and Coleman who have just played against England at Wembley.

“For us, it was very important because playing at Wembley is very, very tough, and they showed us that they have good personality.

“The players learned that they are good players. We have very young players who improved a lot against England and we know now we have a team for the future.”

In the shorter term, Trapattoni’s main focus is next Friday’s World Cup qualifier against the Faroe Islands in Dublin, and he will use Sunday’s friendly encounter with Georgia at the Aviva Stadium to finalise his plans for the Group C minnows.

The manager has already indicated that midfielder Glenn Whelan will be rested ahead of the qualifier, while McCarthy and striker Shane Long, who scored Ireland’s goal at Wembley, are both suspended for the game and could be used on Sunday to protect men who will figure on Friday.

Richard Dunne’s prospects of a run-out for the first time in a year grow by the day.