Blatter to keep it in the family 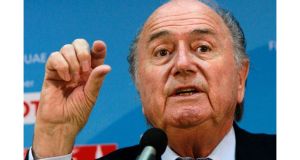 Fifa president Sepp Blatter. Fifa cleared a path for Blatter to win a fourth presidential term after an ethics committee decided he had no case to answer in a bribes-for-votes case. Photograph: Fahad Shadeed/Reuters

Blatter, though, appeared defiant and determined to press on with Wednesday’s election, where he will now be unopposed.

The conference at Fifa’s headquarters came shortly after secretary general Jerome Valcke had confirmed that he sent an email suggesting the 2022 World Cup was “bought” — but insisted he was referring to Qatar using their “financial strength” to legitimately lobby for votes.

Asked about Fifa facing a crisis, Blatter said: “Crisis? What is a crisis? Football is not in a crisis. If you see the final match of the Champions League you must applaud. We are not in a crisis we are only in some difficulties and these will be solved inside our family.”

Mohamed Bin Hammam and Jack Warner, two of FIFA’s most powerful men after Blatter, have been suspended on bribery charges — while a photograph of some of the cash alleged to have been paid to Caribbean officials emerged today.

In the last month there have been allegations in the British Parliament that Qatar paid bribes for the World Cup, and from ex-Football Association chairman Lord Triesman that four other Fifa members asked for cash or favours from England’s 2018 World Cup bid.

Blatter said, however, that there had been no evidence brought forward to back up the claims and that there was no threat to the tournament taking place in Qatar, while Valcke insisted he was not accusing the 2022 bid of unethical behaviour.

Valcke’s email had been sent to Warner earlier this month about Bin Hammam, and the Fifa vice-president from Trinidad made it public in a fury at being banned pending a full investigation.

Valcke wrote: “For MBH, I never understood why he was running. If really he thought he had a chance or just being an extreme way to express how much he does not like anymore JSB (Blatter). Or he thought you can buy Fifa as they bought the WC.”

In a statement, Valcke stated: “Mr Warner has published an email which I sent to him. I’d like to clarify that I may use in an email — a ‘lighter’ way of expression by nature — a much less formal tone than in any form of correspondence.

“Having said that, when I refer to the 2022 Fifa World Cup in that email, what I wanted to say is that the winning bid used their financial strength to lobby for support. They were a candidate with a very important budget and have used it to heavily promote their bid all around the world in a very efficient manner.

“I have at no time made, or was intending to make, any reference to any purchase of votes or similar unethical behaviour. I would also like to clarify that there is, as I said yesterday, no investigation open at Fifa regarding the 2022 Fifa World Cup host election.”