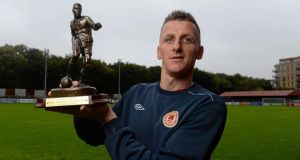 Anto Flood’s recent form for newly-crowned league champions St Patrick’s Athletic was recognised on Monday when the 28-year-old striker was named the Soccer Writers’ Association of Ireland/Airtricity player of the month for September.

Flood played an increasingly prominent role for the Inchicore outfit over the course of the campaign and was a key contributor as the club took 10pts from 12 over the month in the league.

The SWAI is running a table quiz at 8.0 pm on Tuesday evening at Dublin’s Baggot Inn to raise funds for Drogheda United’s Gary O’Neill who is receiving treatment having been diagnosed with testicular cancer.

Con Murphy will oversee proceedings and admission is €10 per perso