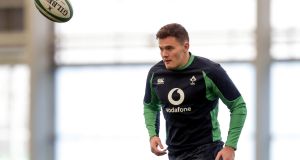 The IRFU have confirmed Ireland and Ulster winger Jacob Stockdale has signed a new three-year contract until the end of the 2022-23 season.

Thursday’s announcement follows the news James Ryan has also committed his future to Ireland and Leinster until 2023, keeping two of Irish rugby’s brightest talents on home soil for another three years at least.

23-year-old Stockdale made his Ireland debut on the 2017 summer tour to the USA before enjoying a stunning breakthrough in 2018, a year which saw him score eight tries in 10 Tests - including one against the All Blacks in Dublin.

On signing his new contract, Stockdale said: “I am delighted to have signed an IRFU contract. I am involved with two ambitious squads and I know I will continue to develop as a player in both environments.

“ Things have been going really well at Ulster and there are exciting things happening in the Ireland set-up and the IRFU High Performance Centre is world class. I look forward to performing on the field for both Ulster and Ireland.”

Meanwhile IRFU performance director David Nucifora said: “Jacob has continued to grow as a player after bursting onto the scheme in his debut Six nations season. He has performed at a consistently high level for both Ireland and Ulster and has huge potential to develop further on the international stage.”