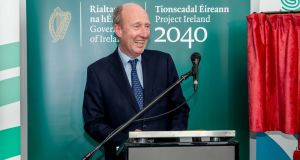 Sports Minister Shane Ross said that his department will write to the European Olympic Association (EOC) to explain that former Olympic Council of Ireland president Pat Hickey will not represent Ireland at the European Games, which begin next week in Minsk. Hickey was invited to attend by the EOC.

“The OFI [Olympic Federation of Ireland] has reformed remarkably well. But Pat Hickey is not representing Ireland,” he added. “It is up to them [EOC] who they invite. It’s not obviously something that we welcome.

Mr Ross added he had not seen the FAI Governance Review but expected to do so very shortly, adding that his views were clear that a new regime and board is necessary.

“I am talking about a full change of regime and a full change of the board,” he reiterated. “There is an AGM coming up next month and the board has promised to step down. We believe that this is going to be the beginning of something very new.”

1 Golf in Level 5 Covid restrictions: Clubs still waiting to hear if they can remain open
2 Hugo Keenan could start in changed Ireland team against Italy
3 Kelly and Lynch ready for Thurles showdown as if it’s their last
4 Wijnaldum attacks ‘stupid’ Pickford tackle on van Dijk
5 Johnny Sexton: ‘It hurts more when you are captain’
Real news has value SUBSCRIBE
Here is your handy guide to sport on television this week