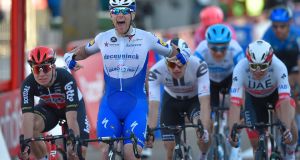 Team Deceuninck’s Sam Bennett celebrates as he crosses the finish-line of the 9th stage of the La Vuelta cycling tour of Spain before being subsequently relegated for “over aggressive riding”. Photograph: Ander Gillenea/AFT/Getty

Is VAR necessary to clean up cycling’s balancing acts?

It must have been right around where Sam Bennett was being dropped off the back of Stage 10 of the Vuelta a España when my accountant rang from New York wanting to know what I thought of the Christian Coleman case.

We hadn’t talked in a while and it would have been rude not to answer, even if these conversations usually end up going in the one direction: beginning along the lines of Coleman – America’s reigning World 100m champion, and fastest man in the world for the last three years – being a complete chancer, totally deserving of that two-year ban if only for being careless enough to miss three tests in the one year.

And how on earth did Salwa Eid Naser get off, the reigning World 400m champion from Bahrain, and third fastest women in history, also cited for three missed tests, only to escape on a technicality after she gave out the wrong address to the World Anti-Doping Agency.

Just don’t start him talking on Taoufik Makhloufi, the three-time Olympic medallist from Algeria, who won the 1,500m in London 2012 while being coached by the notorious Jama Aden, who has been a model of inconsistency since, and this week is being investigated in France after a bag of doping products was found with his name on. Surely now he must to be taken down...

When eventually securing a word in the other direction to say the Vuelta has been the focus of attention this week there was a gentle pause, before he politely asked what did I know about cycling, and sure wasn’t that sport still dodgy anyway?

He was right about one thing: I’ve absolutely no idea what it’s like to finish in the bunch sprint of a Grand Tour, travelling in excess of 80 km/h, with nothing between my skin and the crumpled shrapnel-like wounding of a crash but a jersey and shorts the width of one-ply toilet tissue, knowing that if any rider hits the ground there will only be one loser.

Although I am still nursing a dislocated left thumb and some other small souvenirs from those moments my bike suddenly fell from under me, or indeed over me: six steel screws and a five-inch titanium bar where my left collarbone used to be; a piece of bone floating beneath my left kneecap; what looks like a fresh bite mark down the back of my right calf muscle. And I go cycling for the sheer pleasure of it.

It’s always been a different proposition for those who actually race their bikes for a living, where a fall and the balancing act in between is all part of the business, the risk always heaped beyond any reasonable doubt: which is also why it’s a rare thing for any decision by UCI race commissaires to find harmony among the riders and teams when it comes to any relegation for an “irregular sprint”, and rarer still for any of them to change their minds about it.

Thursday’s State 9 finish offered further proof of that – the UCI, the governing body of world cycling, stating their commissaires’ decision to relegate Bennett after his initial victory was “unanimous”, while Bennett’s team manager Patrick Lefevere at Deceuninck-Quick-Step described it as “bullshit”.

It was certainly costly for Bennett, denied a second stage win in this year’s race, a ninth Grand Tour win in all, and as he initially thought himself a 50th victory of his career, and record 100th Grand Tour stage win for his team Deceuninck-Quick-Step.

No wonder Bennett rested his case with the commissaires for as long as possible, spending almost an hour in the aftermath of the stage at their video assistant referee (VAR) truck, now employed at most UCI races.

It’s hard to know what emotional or physical toll that also took on Stage 10, where Bennett admitted afterwards he “just wasn’t himself”, the last of the 157 riders to finish the day, though in the race for now.

The VAR in cycling is clearly some sort of balancing act, not just between the words of the rider and the commissaires, but between what is considered fair game in the bunch sprint and what is not; and indeed which side Bennett fell on?

In his race commentary for Eurosport on Friday, Seán Kelly suggested that Bennett had given “two bumps on the shoulder” of the Latvian rider Emils Liepins and “quite strong shoulders as well”, and added: “The commissaires are very strict on that now, and you can’t get away with it, the commissaires have so many different angles now on the run in to the finish, their own VAR truck at the finish, and when they looked at that, yes Sam was probably a bit too aggressive, and safety and all that comes into it. If you give a guy a hard shoulder, then go back and give a second one, that’s a very risky one to do, you’re always open to relegation. That is sprinting, and it’s something now you have to be very careful about...”

Only Lefevere, the 65-year-old from Belgium and currently considered the most successful general manager in cycling, wasn’t buying it, producing a series of Tweets on Thursday evening, claiming the cycling VAR decision was “bullshit”.

Still the outcome is a familiar scenario: on Stage 11 of the Tour de France, the commissaires similarly relegated Peter Sagan, also of Bora-Hansgrohe, to the rear of the peloton after a dangerous move in the sprint, where he was seen to similarly shoulder-barge into Wout van Aert of team Jumbo-Visma.

In addition, the UCI had already promised to be extra vigilant of overly aggressive sprinting after another of Bennett’s team mates at Deceuninck-Quick Step, Dutch cyclist Fabio Jakobsen, was involved in a horrific crash in the Stage 1 finish of the Tour of Poland in August, colliding with the barriers at high speed and ending up in a medically induced coma – following a series of similarly heavy falls at the Critérium du Dauphiné, the Vuelta a Burgos, Il Lombardia and the Tour de Wallonie – essentially all the main professional races since the UCI calendar resumed at the start of August.

The UCI had already responded to these spate of recent crashes by saying it will initiate “far-reaching reform of the safety conditions” of future races, which for some may always sound like a sort of balancing act, as long as there isn’t a violent embrace between a rider and the road. Only one loser there and only a matter of time perhaps.