Worst of weeks for Best likely to galvanise Ulster 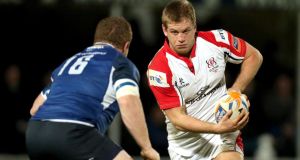 From an Ulster point of view maybe this week’s good fortune has arrived in Warren Gatland’s indifference to the claims of Rory Best. That the province are going into the season’s final straight with a raw wound rather than the satisfaction of having two Lions named for Australia might galvanise the team even more than the stick and carrot of coach Mark Anscombe.

Ulster are crying foul as they face into the Cardiff Blues tomorrow night in Ravenhill.

But it’s no bad thing to carry some self-righteous anger into a game that could help define the season. A home semi-final in the PRO12 may not compensate for Best missing out on selection for the Lions but in terms of concentrating the mind, disappointment can often breed defiance. The collective will hurt for their hooker in Belfast, where the name British and Irish Lions resonates at a different pitch than in Dublin or Limerick. Chris Henry makes that clear enough.

Bit Shocked
“I think we are all a bit shocked for Rory not to get picked and delighted for Tommy,” says Henry. “Tommy had such massive ground to make up and the fact he was able to come back from a bad injury and then work so hard and find his form quickly to make such an impact . . . it’s just incredible what he’s done.

“On the other hand I’m really stunned about Rory. Ask anyone from here and we are all just taken aback. I mean it’s definitely just their loss not taking him . . . I think his performances justified them taking him and the type person he is as well.

“He is the just the sort of person you would want to bring with a group of players like. But unfortunately that’s just a twist in this season and knowing Rory as I know Rory the very last thing he will do is allow this to affect the Ulster team in any way at all.”

Gatland’s cold comfort of explaining that Best was “desperately unlucky” to miss out doesn’t cut much ice up in Belfast. That his lineout statistics didn’t stack up quite as high as the Kiwi would have liked, where the throwing of Dylan Hartley, Tom Youngs and Richard Hibbard evidently did, cost dearly.

But Ulster folk point to other areas where Best excels, although now he is open to the lineout watchers.

Inevitably people will now count his darts in much the same way as outhalf Paddy Jackson’s kicking was used to define how useful he was for Ireland. The Ravenhill view is the decision was clumsy and blinkered.

Team leaders
“Without a doubt Rory is one of the team leaders here along with Johann (Muller). Definitely,” says Henry. “ He’s a great leader and a huge character to everyone in this team. Just feel so sorry for him but its one of those things. He’ll move on, we’ll move on . . . that’s how it is.

“He’ll do the same as he always does, give 100 per cent at every session and lead from the front. I’ve no doubt that will be the case this Friday and he’ll bring the team along.”