We must be wary of the dangers posed by concussion 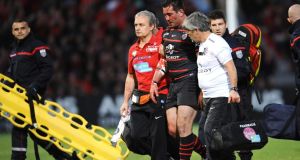 Toulouse centre Florian Fritz leaves the pitch after he was injured during the Top 14 quarter-final rugby union match against Racing Metro earlier this month. He was allowed to return to the game. Photograph: Getty Images

After 17 years in top flight rugby it appears Jonny Wilkinson’s greatest fear is that of getting a proper job. After coming through so many injuries he could be forgiven for this fear – ditto Brian O’Driscoll .

Due to the development of all-year- round play, some 8-14 year olds in the US are now playing up to 100 baseball games per year. Hence little league has developed quotas. Kids pitching for their teams have their totals logged. When the kid hits a specific quota, regardless of position, they stop pitching.

For example, pitchers aged 14 and under must adhere to the following rest requirements: if a player pitches 66 or more pitches in a day, four calendar days of rest must be observed. The manager must remove the pitcher when said pitcher reaches the limit for his/her age group (eg League Age 1 -16 95 pitches per day).

The logic is simple: to prevent repetitive strain injuries which may impact their career in later years. Surely a brain is more valuable than an arm?

It is interesting that these methods to log repetition are not employed here in Ireland in the various sporting codes which experience continuous collisions in training and matches.

The non-formal medical definition of concussion is defined by the American Association of Neurological Surgeons (AANS) as “an injury to the brain that results in temporary loss of normal brain function”. Most worryingly the AANS notes that “many people assume that concussions involve a loss of consciousness, but that is not true. In most cases, a person with a concussion never loses consciousness”.

Brain trauma Hence what Florian Fritz experienced for Toulouse against Racing Metro is far in excess of the AANS understanding of concussion– but he was allowed to return to the pitch.

That is France. But what do we actually know of concussion? Game Changers is an extraordinary 5min and 20sec into the world that is trying to understand the long-term consequences of repetitive brain trauma in sports.

Christopher Nowinski is an 18½ stone former pro-wrestler who suffered with depression, short-term memory loss, sleep walking and headaches for many years before taking action. Game Changers shows the many reasons why.

Nowinski is a co-director of the Center for the study of Chronic Traumatic Encephalopathy. Although CTE has very similar symptoms to dementia, those with CTE all have a background of repetitive concussion.

The first case of CTE studied in Boston University was in 2008 on John Grimsley (1962-2008), a former linebacker for the Houston Oilers and Miami Dolphins, who died at the age of 45 from an accidental gunshot wound .

Why is all this relevant to me or indeed Ireland? Well, my first cousin Laurena Holleran is departing this month to Washington University, St Louis on a five-year post-doctoral job career to specifically understand the neuropathology of CTE. Laurena, the daughter of John Joe, the former chairman of the Galway County Football Board, is steeped in sport and will complete her PHD in Neuro Imaging at NUIG shortly. With a primary degree in anatomy and a masters in neuropharmacology, she is well placed to bring back some serious information to Irish sport.

Interestingly, her focus thus far has been on clinical neuro imaging normally conducted in psychiatry and schizophrenia, but she will be bringing these methods into a sports application.

The value in going to Washington university for her research is their collaboration with Boston University, the project leaders in this research. She will have access to a brain bank of retired NFL players who have donated their brains to science. The vast majority of these brains have the neurodegenerative disease, CTE.

Living people Laurena’s role is to image (MRI) these brains to see what brain changes have occurred and then to ultimately apply this to living people and understand the neuropathology of CTE. To confirm MRI findings the brain must be examined under microscope. In time she hopes to reduce the variables that exist in living people that will effect conclusions such as genetics, smoking, alcohol abuse etc.

Last year the deceased former Manly rugby player and NSW Waratahs coach Barry “Tizza” Taylor’s brain was examined in Boston University, to become the first rugby player to be diagnosed with CTE. The challenge for our game is that research is so immature, hence Laurena travelling to Washington for five years. In time she hopes that a methodology evolves through MRI that will track brain changes in living athletes that can properly detect and protect players.

In the meantime, Nowinski et al don’t want to spoil the fun of playing but do insist on giving coaches an appreciation of what repetitive brain trauma means to athletes and how to keep them safe; such as coaches scaling back hits by developing footballing skills, logging contact, preventing sport from destroying kids' lives by finding ways to play the game safely and with Fritz in mind, no kid (or adult) should be allowed back onto the pitch when suspected of concussion.