Waratahs back to become highest-paid player in English Premiership history 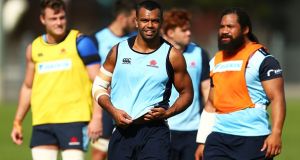 Wasps have completed one of the biggest signings in Aviva Premiership history after announcing that Australia star Kurtley Beale has been recruited for the 2016-17 season.

Beale, who has amassed 60 international caps, is understood to have agreed a one-year contract with the option for a 12-month extension if his initial spell at the Ricoh Arena proves to be a success.

Wasps director of rugby Dai Young said: “There are very few players in world rugby who can really excite people and get spectators on the edge of their seats. Kurtley Beale is one of those rare talents.”

Wasps have stated that Beale will arrive at the Ricoh Arena upon completion of the Waratahs’ current Super Rugby campaign, effectively ruling him out of Australia’s three-Test series against England in June.

Signing one of the most gifted playmakers of his generation while still in his prime — Beale is 27 years old — is a major coup, but the club have had to break the bank to entice him to Coventry with his annual salary reported to be worth in excess of £700,000 (€890,000).

If the figure is accurate it makes him the highest-earning player in Premiership history, eclipsing the £500,000 (€635,000) paid to rugby league convert Sam Burgess.

Beale has been earmarked for inside centre where he will play in tandem with incoming fly-half and former Rebels team-mate Danny Cipriani, but he has filled most positions across the back line and has appeared at two World Cups.

“Every time Kurtley gets the ball in his hands, you can sense the anticipation among those watching that something is going to happen,” Young said.

“At Wasps we like to play expansive, attacking rugby, and these are the type of players we want within our set-up.

“Kurtley’s versatility is amazing when you think he’s played international rugby at 15, 12, wing and on occasion at 10.

“To sign an international rugby player who can perform in all those positions will be a great strength for us moving forward.

“Kurtley has been part of many successful environments and the experience he will bring should help the squad in a similar way to how George Smith and Charles Piutau have this season.”

Beale comes with baggage, however, in the form of a lengthy disciplinary record that includes a spell in counselling for alcohol-related issues after punching Rebels team-mate Gareth Delve in 2013 and being fined a year later for sending an offensive text to Australia team manager Di Patston.

“I can’t wait to move to England and pull on the Wasps jersey,” said Beale, who will remain eligible for Test selection due to holding the 60 caps outlined as the minimum requirement if overseas-based Wallabies are to be considered.

“It’s going to be difficult to leave the Waratahs at the end of this season — I first joined the Waratahs when I was 16 and have loved every minute of it, but I feel the time is right to make this move.

“There was a lot to weigh up when making the decision, but I have always loved playing in England and the recent World Cup was an amazing experience. The passion for the game in Europe is huge and I want to be a part of it.

“Wasps are a big club with a great coaching staff and a very talented playing roster. I am only 27 now and I know my best footy is ahead of me, both at club and Test level.

“I want to win trophies with Wasps in the Premiership and Europe and continue playing for the Wallabies.

“It’s a privilege every time you get to pull on that Test jersey and if I’m lucky enough to be selected for Australia in the future, I’ll be ready.”