Wallabies to do battle up front with Springboks in Perth 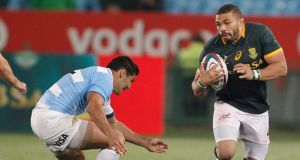 Brian Habana (right) will be winning his 100th Test cap when he lines out for South Africa against Australia in Perth today. Photograph: Kim Ludbrook/EPA

The headlines have focused on Bryan Habana’s 100th Test and a new Wallabies halfback partnership but it is in the maelstrom of the forward battle that today’s clash between Australia and South Africa is likely to be decided.

The Springboks go into the match at Perth’s Subiaco Oval leading the Rugby Championship after two narrow victories over Argentina, while Australia remain winless after a draw and a 51-20 pummeling at the hands of the All Blacks.

McKenzie has responded to the humiliation at Eden Park by reshuffling his backline but the six-two split in favour of the forwards on his replacements bench is perhaps a better indication of the sort of match he is expecting.

Scrumhalf Nick Phipps and outhalf Bernard Foley, the fulcrum of New South Wales Waratahs’ Super Rugby triumph, will start a Test together for the first time after McKenzie abandoned his experiment with Kurtley Beale at number 10.

It will be the performance up front, however, that is likely to determine whether Australia can secure a first victory against one of the traditional southern hemisphere powers since McKenzie took charge.

If McKenzie had any doubt about South Africa’s approach to the match, they were dispelled when Heyneke Meyer made six changes to the team that squeaked past Argentina 33-31 in Salta.

Adriaan Strauss comes in at hooker alongside Tendai “The Beast” Mtawarira in the front row, Victor Matfield slotted back into the second row and Morne Steyn returned at flyhalf in place of the dropped Handre Pollard. Peerless ball-winner Strauss wins his place ahead of Bismarck du Plessis because of his discipline, strong scrummaging and accurate throwing-in, while Matfield remains an almost peerless ball winner at lineout time.

With Steyn’s booming boot ready to target the corners and punish any Australian indiscipline within 50 metres of their line, South Africa look set up to monster their opponents at the set-piece and maul them into submission or penalties.

Despite the hammering the Australia pack took in Auckland, McKenzie makes only one enforced change to his forwards with James Hanson, his fourth choice at hooker, replacing the injured Nathan Charles.

Australia will be looking for one of the increasingly frequent “good days in the office” at set-piece and hope to get the upper hand in the backrow battle for breakdown supremacy against a less experienced Springbok loose trio.

Captain Michael Hooper can be expected to be as tireless as ever at openside, while the abrasive Scott Fardy at blindside and number eight Wycliff Palu need big games to be sure of retaining their starting spots.

Palu especially needs to show the sort of form with ball in hand that he did in the French series earlier this year and in that quest the selection of his Super Rugby team mate Phipps could be a big help.

The lively Phipps presents a greater threat than the demoted Nic White around the fringes and has shown great aptitude for getting his big ball carriers moving over the gainline.

Strauss’s selection means the fiery Du Plessis will be rested when the benches are cleared for the last 20 minutes, while loose forward Warren Whiteley will also be champing at the bit to get on the field and win his first cap.

McKenzie has offered former skipper James Horwill a chance to revive his career off the bench but Australians hope he is not left regretting the absence of Will Skelton if a Springbok maul is rolling towards the try line with seconds to go.

1 Ken Early: Despite coronavirus, Premier League season must be finished if at all possible
2 Harry Kane: I won’t stay at Tottenham ‘for the sake of it’
3 My favourite sporting moment: When Zidane glided through Brazil in 2006
4 Summer tours next in line for postponement as rugby assesses options
5 ‘Magnificent’ Conor Connelly remembered after sudden death
Real news has value SUBSCRIBE

Ken Early on finishing the Premier League season, favourite sporting moments 08:03
New Zealand Rugby forced to cancel lower tier competitions 07:20
Harry Kane: I won’t stay at Tottenham ‘for the sake of it’ 07:39
Competitive instinct will ensure sport returns as it always was 06:30
Ken Early: Despite coronavirus, Premier League season must be finished if at all possible 06:00
Here is your handy guide to sport on television this week