‘We have the potential to keep improving now, I think we’ve shown that,’ says Briggs 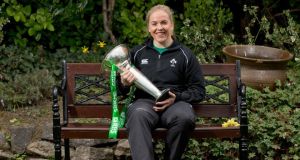 Niamh Briggs hobbles down the stairs carrying the Six Nations trophy and a limp. She’s not sure just yet what’s ailing her leg but she declines the offer of a seat all the same. Between celebrations and press impositions, she hasn’t had a chance to get it checked out yet. All in good time.

This still takes some getting used to. The Grand Slam in 2013 was one thing. Beating New Zealand at the World Cup was another.

But great sporting lives aren’t made of days of sunshine here and there. You have to earn it through the mundane accumulation of win after win and tot them up into championships to get there. Briggs is one of nine players for whom this is a second title in three seasons and there is, she’d like to think, much more to come.

“It’s very different – 2013 was absolutely unbelievable. It was the Grand Slam, it was the culmination of a lot of years of hard work. This was different because a lot of people wrote us off before it and when we lost against France, nobody gave us a chance of coming back to win the tournament.

“We have a new management, seven new caps, it’s just a different place we’re in. But we gelled together really quickly. We didn’t have a whole lot of time together but we made the best of it. This was good for us because it cemented our place. It showed that 2013 wasn’t a flash in the pan. It put us back on the world rugby stage which is where we want to be. We have the potential to keep improving now, I think we’ve shown that.”

This wasn’t supposed to be their year at all. For all the sweetness and light that envelopes Irish rugby this week, their situation looked far from ideal towards the back end of 2014. Almost four months had passed since the end of the World Cup and still Philip Doyle hadn’t been replaced as head coach.

Tom Tierney was appointed just eight weeks before the start of the championship and even then only on a part-time basis until next month when he comes on board full-time. The temptation to write the 2015 championship off and tread water for a season must have been unavoidable.

“It was more about how quickly we could gel with a new management. Things were different, definitely. You’re so used to the previous regime and people hate change and we’re very like that. But everyone stepped up.

“It would have been easy to get panicky or whatever. But we kind of got together as senior players and spoke about it and we said flat out that it was never going to be used as an excuse. Whether we won or lost the championship, it wasn’t going to be because Tom wasn’t appointed until December. It was going to be because we weren’t good enough or because we didn’t play well enough.”

And so a campaign that began in farce under faulty lights in Ashbourne ended with them going to Scotland and barbecuing the home side 73-3. They got on a roll and never stopped rocking. If it looks like they overegged it a bit, they’re serenely unapologetic about it. As Ali Miller says, the best teams can’t win by enough.

“We’ve never run up a score like that since I’ve been playing,” says Briggs. “We definitely didn’t expect that. But in fairness to the girls, we’ve asked everyone to go to a new level this year in terms of ruthlessness and being clinical in what we want to do and that’s what we did against Scotland.

“I don’t think it was ever about fear. I just think that we wanted to be better and to go to a new level. We’ve had tremendous success over the last couple of years but when we’ve played against teams that are weaker than us, we’ve always come down to their level a little bit. It was important for us to be able to go beyond that.”

1 Premier League to restart on June 17th - BBC reports
2 Dave Hannigan: Trump gets the clubs back out as death toll keeps rising
3 Philip Browne admits funding model for Irish rugby is not sustainable
4 Dr Bob Rotella: ‘If you focus only on the target you’ll play darn good golf’
5 Sonia O’Sullivan: How to keep your competitive edge from going blunt
Real news has value SUBSCRIBE