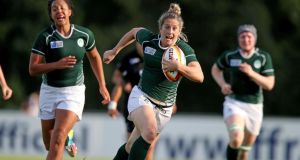 Ireland’s Alison Miller runs in for a try against New Zealand during the Pool B clash at the FFR Headquarters, Marcoussis, Paris. Photograph: Dan Sheridan/Inpho

Anyone familiar with Laois GAA will have heard of the Miller clan from Timahoe. Dick Miller was county chairman a few years ago.

“My dad [the late Bobby Miller] is from Timahoe but I’m from Ballickmoyler on the Carlow border,” said Irish winger Alison Miller yesterday.

“Dick is my uncle, yeah. Big GAA people. All my uncles and Dad played county football although Dad took up rugby when he was 40, played for one year. He was always interested in rugby but all other sports as well.”

That trait was undoubtedly passed on.

For all the Gaelic footballing pedigree in this famous gang of Laois brothers, it’s the 26-year- old’s try against the mighty New Zealand that will live longest in the family’s already proud sporting history.

“I just remember Niamh Briggs getting the ball and thinking something could happen here. When Niamh gets the ball something can always happen. I just had to get up in support.”

Briggs did do something, stepping one then breaking another would-be New Zealand tackle and drawing outhalf Kelly Brazier. Miller, who has represented Ireland schools at the 400 metre hurdles, was already at full pelt.

The pass ensured she didn’t have to break stride.

“I looked up and there was still a player (New Zealand scrumhalf Emma Jensen). I just tried to do something with my feet, bring her in or out, I wasn’t sure if I was going to step in or step out. I just did it. Ended up going on the outside of her and went for the corner.”

England and Lions winger Jason Robinson used to always say: ‘If I don’t know what I’m going to do how the hell can the tackler?’

It’s a nightmare scenario for the last defender when faced with such natural pace.

“Yeah, you can’t be read,” Miller agreed. “It got me over in the corner thank God.”

She scorched past Jensen yet, somehow, Brazier got across to make a last ditch tackle but with two hands firmly gripping the ball Miller’s momentum was never going to be stopped.

“The girls will always slag that I never look great after scoring a try so there isn’t anything new there.”

That brought her up to 12 tries in 21 Test matches since being first capped in 2010.

This all happens in a blink of an eye. Next week Miller will be back down in UCC to begin her final year in PE and History teaching.

“I’ve a week of lectures as soon as I get home.”

Ah, you deserve a holiday. At least go across to Stradbally for the Electric Picnic?

You’re the only person in Laois who hasn’t.

Despite the GAA background, her sporting journey has been nothing short of ridiculous. It started at St Abban’s athletic club in Monavea.

“They used to run competitions for primary schools in the area. I won a competition so they encouraged me to get into it...”

Were you always quick?

The hurdles and long jump were not enough, she had to try the heptathlon.

What was your weakest event?

“You are always going to have a few weaker events but I was alright at them I suppose. I always knew I wasn’t going to be an athlete of international standard.”

We have to tell her she is now.

So, no Olympic dreams?

“Even as a child I was very pragmatic believe it or not. I’d look at my times and go, ‘No, that’s very far off.’ I was always realistic.”

To keep herself sane she also did gymnastics, ballet, hockey, volleyball and her favourite, basketball.

“I went to a really sporty school – St Leo’s in Carlow. The teachers used to laugh at me. ‘Generally Alison you play one sport in sixth year, not all of them’.”

The transition to rugby only happened in college. The basketball skills helped but so did all the rest.

“Being able to run correctly, from athletics, was a huge thing. People don’t understand that but stride is really important.”

We eventually get around to England and that World Cup semi-final she is playing today. They will have seen the try as well.

“But I’m quite a physical winger. I like to break tackles. I’m not afraid of that part of the game. I enjoy the contact side of it. If I have to come back inside that’s fine.”