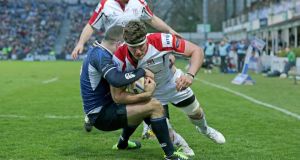 Leinster 18
Ulster 22
For the second week running Leinster were outscored in tries at home and were indebted to Ian Madigan for scoring all of their points, but this week he couldn’t pull a rabbit out of the hat. And for all Leinster’s frustrations with George Clancy, they would have been nothing compared to Ulster’s annoyance had the referee’s bizarre decision to go to the TMO after signalling full-time resulted in what possibly have been the first post-match, match-winning try in the history of the game.

As Leinster had never looked like scoring a try, this made the decision to eschew a near certain three-pointer with fully five minutes remaining all the more curious.

In any event, they would have four more penalties, opting for a scrum each time, and benefitted from the harsh sinbinning of Jarred Payne, to throw the kitchen sink at Ulster for up to six minutes into overtime. Whereupon, 20 seconds after clearly blowing for full-time, Clancy decided to go to the TMO to “double check” if Seán Cronin had grounded the ball on the line with the game’s last play.

Comically therefore, the players having shaken hands and a sizeable chunk of the crowd having vacated their seats, everyone had to wait for a verdict from the TMO, Hugh Quinn. The cameras clearly showed that Kyle McCall and Robbie Diack had combined to hold up the Leinster replacement hooker, which was perhaps just as well.

Clancy, it is true, lacked vigilance at the breakdown – permitting persistent spoiler Dan Tuohy to knock the ball from Isaac Boss illegally defied belief – and was inconsistent at scrum time. But Ulster were undoubtedly deserving winners.

Throughout, there was better variety to their attacking game and they carried the sharper cutting edge, particularly through Andrew Trimble and Craig Gilroy.

After Chris Henry had taken up the recycle, Ulster gained very easy yards by going wide on the left through Gilroy and on the right through Payne, before quick hands by Tuohy released Nick Williams up the middle, and Paddy Jackson's cut-out pass put Diack over in the corner.

Similarly, their second-half try originated in a good take by Jackson off another Boss box kick and as Leinster again pushed up unconvincingly, the ball was worked across to the left for Gilroy to beat Isa Nacewa on the outside. Ten phases later, with Henry making three carries up the middle and the attack given added impetus by Payne wide on the left off Jackson’s lovely flat pass, Trimble made headway once more before Pienaar put Iain Henderson over on the blindside.

Indeed it was from another leaping take by Jackson off a Boss box kick – when tackled in the air by Conway – that Pienaar landed the security three-pointer with his fifth penalty of the night. Pienaar reassumed the goal-kicking and pulled the strings in his own effortlessly composed way, but Jackson too was a key man.

No less than Ireland, Ulster have had issues with Jackson playing too deep at times, but here they addressed that flaw somewhat better, the outhalf often taking the ball flat to the line and invariably picking out the right option with his accurate passing.

McCall, a 21-year-old Academy prop with Ballinahinch who was making his debut, was one of the heroes in the end game, and so too was the man he replaced, Ricky Lutton who, on his first full start, acquitted himself very well against Cian Healy.

1 Health official says decision to hold Liverpool-Atlético game was wrong
2 Son Heung-min to carry out mandatory national service in South Korea
3 Reality Bites – Tales from the new normal: Shane O’Donnell
4 Avoid the treadmill at all costs – marathon training in the 2km radius
5 Only a matter of time before British Open bites the dust
Real news has value SUBSCRIBE