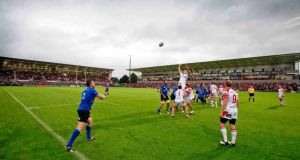 A general view of a revamped Ravenhill where Ulster beat Leinster in a pre-season friendly. Photograph: Morgan Treacy/Inpho

Ulster 21 Leinster 19: As is the way with pre-season friendlies the result was always secondary to what was essentially a hit-out for the expanded and unfamiliar looking squads available to Mark Anscombe and Matt O’Connor.

On another day there might have been more attention paid to O’Connor’s first game in charge but for once it was Ravenhill which was absorbing most of the comment with its two new stands, situated behind both ends of the old ground, being thrown open for the first time, though building work will continue for most of this season to complete the €17 million redevelopment by constructing a brand new stand on the war memorial side of the pitch.

For all that, though, it was a cracking game with Jimmy Gopperth kicking 14 points, and looking good on his first start in blue since his arrival from Newcastle, before Ulster battled back to steal it at the end.

And in the week that saw Eoin O’Malley retire, the selection of Brendan Macken at outside centre – which initially put him up against a possible pretender next season for the Ireland number 13 shirt Jared Payne – proved worth a look with the Ulster player looking very sharp for the half he was on, while the return to action of Luke Marshall in the second half was also eye-catching.

Naturally there was plenty of rustiness and over-eagerness on the part of some of the young players all keen to impress O’Connor and Anscombe in a game with rolling subs. Gopperth certainly had a busy opening period and he was on hand to kick Leinster into an early lead with an eighth minute penalty.

The new signing then made it 6-0 after Nick Williams was pinged at the breakdown before a great lineout maul off Quinn Roux ultimately led to Dominic Ryan spinning off the back and over.

Gopperth nailed the tricky conversion and Leinster were 13-0 up after 23 minutes. Ulster responded quickly through Payne who battered his way through near the posts five minutes later with newly returned James McKinney converting.

The half ended on a high-note for the hosts when an Ulster driving maul was held up by Leinster on their line and Ulster flanker Sean Doyle emptied Leo Auva’a, forcing him to concede the five-metre scrum.

From there the inevitable happened and Nick Williams barrelled his way over with McKinney’s conversion – the last kick of the half – putting Ulster 14-13 in front.

As widely expected, Ulster rang the changes at half-time with Anscombe going for wholesale alterations, which saw Luke Marshall return to action in a and only McKinney, Doyle and Chris Farrell remain.

Gopperth put Leinster back in front early on with his third penalty and then just on the hour mark he was on target again before being taken off. McKinney was badly wide with a 67th minute penalty effort but Ulster upped the ante – with Dan Tuohy prominent – late on and with two minutes left Ian Porter wriggled over near the sticks to tie the scores.

McKinney’s conversion put Ulster two points in front which is now it ended.