Support for referee over Gonzaga player with head injury 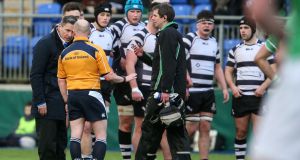 The incident, surrounding a suspected head injury to teenage prop Fiachra Keane, was transmitted live on Setanta Sports via the referee’s microphone.

Leinster, in an emailed statement, have backed Glennon’s decision to insist that Keane be substituted in the 55th minute. “The schools committee in Leinster Rugby will be holding its own internal investigation following receipt of the official referee’s report; however, in the meantime Leinster Rugby would like to clarify a number of issues to alleviate any doubt.

“The referee is the ultimate arbiter of all games played at all levels and it is with he/she that any final decision rests with regard to on-field activity, and this includes the removal of a player for medical reasons as detailed in IRB Law 3.9.”

The incident brings into question the reach of the IRFU and Leinster Branch’s concussion awareness programme in schools and across all amateur levels in Ireland.

“The only directive from Lansdowne Road is that Head Injury Assessment (HIA) is only permitted in the professional game,” said a source within the Leinster referees association.

“Anywhere below that a HIA is not permissible and that includes the entire amateur game, even the All-Ireland League.

“Schools and clubs are providing people on the touchline, highly professional medical people, who are saying ‘I’ll sort out this injured player’ without knowing the protocols.”

The only protocol when there is a suspected concussion of an amateur or age grade rugby player is that he or she must be removed from the field and not allowed to return. They then must follow the minimum 23-day return to play protocols. This can be as short as five days in professional rugby.

The Leinster statement added: “Leinster Rugby would also like to direct all of those involved with the game of rugby in Leinster to the following link which outlines clearly and concisely the protocols should a concussion be suspected at training or during a match at any level of the domestic game: irishrugby.ie/concussion

“In summary, Leinster Rugby would ask all those involved in the domestic game to inform themselves of their responsibilities to STOP – INFORM – REST – RETURN, and if a player has any one of the signs or symptoms of concussion he/she should be removed from the field of play and not allowed to return.”

Three signs of concussion are: a player lying motionless on ground, slow to get up and grabbing or clutching his or her head.

After 54 minutes of Thursday’s Leinster Schools Cup quarter-final, with defending champions Roscrea leading 22-10, Keane appeared to clash heads with a team-mate while tackling an opponent. Keane went to ground, put his hand to his head and remained on the ground as play moved on.

Glennon, the referee, and Meagher, who was identified by Gonzaga physio Niall Bevan as the team’s “medic”, arrived at the same time to where Keane was receiving treatment from Bevan.

On realising that Meagher was performing a form of HIA, by asking Keane questions, the referee judged this to be a suspected concussion and demanded a substitution.

Meagher became increasingly irate when repeatedly stating Keane is “not concussed” and has not “suffered a head injury”.

Meagher reached this conclusion having examined Keane for 15 seconds and less than 30 seconds after the impact occurred.

Gonzaga principal Damon McCaul and games master Paul Kieran were unavailable for comment when contacted by The Irish Times on Friday.

Efforts were also made to contact Dr Meagher, a consultant plastic surgeon, via his office in the Beacon hospital.

A message was left with his secretary to contact The Irish Times but there was no response.

The Leinster Schools Committee, chaired by Conor Montayne, will conduct the investigation. Kieran is a member of this committee.

54 minutes: Roscrea lead 22-10 as Gonzaga loosehead prop Fiachra Keane goes to ground after a collision. He puts his hand to his head and remains on the ground as play moves on.

At the next break in play, 20 seconds after impact, referee (Gary Glennon) and doctor (Peter Meagher) arrive to where physio Niall Bevan is treating Keane . . .

Referee Gary Glennon: “Help him back to his feet please . . .”

Gonzaga physio Niall Bevan: “My medic is asking him questions . . .”

Referee: “If you think he has had a head injury that’s end of story, I’m sorry.”

Referee: “There is no assessment. Let’s replace this player.”

Referee signals for a replacement as Dr Meagher can be seen to talk loudly to referee.

Meagher [talking loudly]: “He is not concussed. Ref, ref, it is not a head injury.”

Meagher [turns to walk away but stops]: “He is not a head injury.”

Meagher [still remonstrating]: “He is not a head injury.”

Physio: “Why would you do that?”

Meagher: “He is not a head injury.”

Meagher: “You are telling me . . . He answered all the questions correctly. He does not have a head injury. He does not.”

Referee: “Thank you. I am the referee.”

Meagher: “He does not have a head injury. Did you ask him any questions? Did you?”

Meagher: “So how could you tell he has a head injury?

Meagher: “He is not a head injury.”

Physio guides Meagher away. Meagher returns to guide distressed player off the field.

Play resumes with a scrum.