Skerries make the most of their chances to overcome CUS 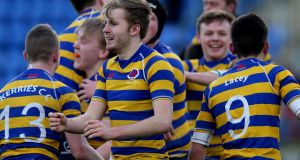 The refusal of Robert McKey to give up on a hopeless cause was the key to Skerries overcoming CUS to make the final four in the Vinnie Murray Senior Cup at Donnybrook yesterday.

This game was tied at 8-all, mainly because CUS could not take their gilt-edged chances, when Skerries Dean Lacey launched a long ball forward in the 46th minute.

Wing McKey ate up the ground to make the most of a fumble and hammer in a tackle that shook the ball loose for centre Ruairi Woods to pounce.

Two quick penalties from scrum-half Michael Woods made it an 11-point game and gave Skerries the buffer they needed to hold on, despite a try by lock Luke O’Higgins.