Schools Rugby: Belvedere have total recall of 2005 triumph over Blackrock 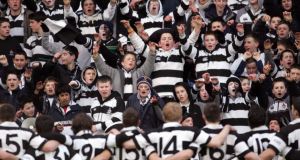 “Belvedere fuelled by inner belief”, was the headline in The Irish Times on March 18th, 2005.

They had plenty of that, and needed it to beat Blackrock 16-10, thereby ending a 33-year drought since claiming their previous Leinster Schools Senior Cup.

This was the last great Belvedere College team. Perhaps their greatest ever.

It was no ordinary Blackrock side either. Luke Fitzgerald and Ian Madigan were joined by an astonishing six others who eventually turned professional – Niall Morris, Vas Artemiev, Dave Moore, Cian Culleton, Paul Ryan and Zach Farvivarz.

All told, ’Rock were expected to collect title number 65 but Belvedere cleaned them out with two early tries. They also outsmarted them, by switching Eoin O’Malley and Ian Keatley, as a swashbuckling pack that had Cian Healy in his previous incarnation of hooker essentially outmuscled their physically bigger opponents.

Healy remembers the key to Blackrock’s attack was Fitzgerald, especially due to an injury sustained by another future Leinster recruit James Power.

“We had him fairly closed down – that was the answer to their team. Shut down Lukey and they are all one out runners then. It was a simple enough for us.”

“Besides Healy we didn’t have any Leinster or Ireland schools players so we came in a little under the radar,” said Belvedere scrumhalf Paul O’Donohoe.

“We revelled in the situation that ’Rock were like the Harlem Globetrotters. As well as Lukey, we went after Mads – seeing him as a bit of a flash fourth year. He didn’t have one of his best games.”

O’Donohoe and flanker Robert Fitzgerald hounded Madigan all day, Fitzgerald blocking his kick and recovering to claim the second try of the game.

Also Brian Moran ran through him to create the platform for Eoin O’Malley to fire off a perfectly weighted cross-field kick leading to Peter Woods’s try.

It ended with Blackrock pounding away after a Keatley penalty and sweet drop goal had made it a six-point deficit.

Belvo conceded a Darren O’Reilly try which Fitzgerald converted but they held strong to send Robert Carson up the old West Stand steps.

That was the end of them, they broke up and drifted into different pursuits with a remarkable four players turning professional and lock Cathal Pendred becoming a UFC fighter.

As far back as 2011, O’Malley looked like Brian O’Driscoll’s heir apparent, certainly for Leinster, even shifting him out of a Joe Schmidt team at one stage. Injury, cruelly, stripped him of a longer career.

O’Donohoe brought a power game to the number-nine jersey not seen for some time but his career also stuttered at Leinster and Connacht before injury also forced him into the business world.

Both, at least, are already digging into promising new careers.

“David Gilchrist was the most talented of the lot of us but he just didn’t go on, for whatever reason,” O’Donohoe added. “Michael Cuddy is still propping down for Bective. But that’s it.”

That is it, life moves on, but these sort of great memories never fade.