New looks side have a tough challenge in Wales 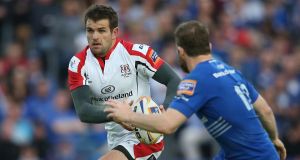 Jared Payne: selected at outside centre against the Scarlets. Photograph: Billy Stickland

Scarlets v Ulster
Parc y Scarlets, 2.40pm Sky Sports 1
In the brave new world of the Guinness Pro12 and Sky Sports, this is the first of the TV-dictated early Saturday afternoon kick-off times to assist Sky’s coverage beginning before BT’s Premiership coverage, and it will be interesting to how the paying punters respond. Saturday afternoons may have been the way once, but one suspects not any more.

After their own summer upheavals, a new-look Ulster begin life in the post-David Humphreys/Johann Muller/ Mark Anscombe/John Afoa era under interim head coach Les Kiss with Humphreys’ trio of farewell signings, Louis Ludik, Franco van der Merwe and Wiehahn Herbst, all chosen to make their competitive debuts. Ludik starts at fullback, thereby permitting Kiss to facilitate Jared Payne’s conversion to outside centre in advance of him qualifying for Ireland, with van der Merwe in the secondrow and Herbst, who has made a big impression in pre-season, starting at tighthead.

Ian Humphreys begins his second spell with the province after his two-year sabbatical in London Irish, while the return of the gifted Stuart Olding for his first game since rupturing his anterior cruciate ligament last October must be like a new signing as well.

It’s also a measure of Ulster’s attacking riches that even in the absence of Tommy Bowe and Darren Cave, Ulster’s leading try scorers in the league last season, Andrew Trimble and Luke Marshall are on the bench. All told Ulster show just two changes from the side which outmuscled Leinster 10-7 in Tallaght last weekend, with Callum Black and Chris Henry coming in at loosehead and openside.

Buoyed by their 26-all draw away to Bath and 29-24 win over Gloucester in pre-season, Scarlets head coach Wayne Pivac has named 12 internationals in a strong starting XV.

Ulster have had the edge in this fixture lately, winning five of the last six meetings, but then again the Scarlets are unbeaten at home in Pro12 in the calendar year, winning six out of six to date. Liable to be a very close, competitive affair.