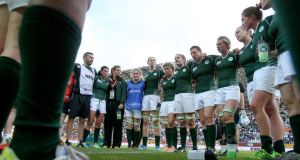 A despondent Ireland squad after the defeat to England in Paris. Photograph: Dan Sheridan / Inpho

It’s common enough for coaches, of multiple sporting persuasions, to advise their players during major tournaments to avoid the Twitter machine because, as Mick McCarthy once put it, “they should call it Twatter – too many tweets make a twat”.

But if Philip Doyle’s players were given Twatter freedom since setting sail for the rugby World Cup in France, they’d have been heartened by the proliferation of ‘COYGIG’ messages (that’d be ‘come on you girls in green’, news to those of us who thought it was a concert by a happening new pop combo) and nigh on infinite hearty good wishes.

But then, too, a sprinkling of stuff about fake tans and lipstick and hair-dos and mascara and thighs and boobs and butchness and men-hating and girl-on-girl action and the like, largely in response to a piece in a Sunday newspaper about women’s rugby, one that The Onion would have refused to publish, for fear its readers would think it inconceivably beyond parody.

Just when you thought the achievements of the women’s team might encourage folk to focus on their sporting prowess rather than, well, fake tans and threesomes, along it came.

Better still, were some of the comments under a supportive piece, the best, really, the one that reckoned those who threw their eyes heavenwards on reading the original scribble were “trendy pseudo-liberal thought-control Gestapo”.

You had to smile, like. It called to mind meeting up with the Dublin-based players in the Irish squad at Old Belvedere Rugby Club back on a January night so cold that the greeting went along the lines of “hebbbbblo”.

Lowest order The squad was in training ahead of its defence of its Six Nations crown, all of the players still buzzing from the reaction to their Grand Slam the year before.

“I go to primary schools,” said Sophie Spence, who coaches rugby, “and everyone knows about it. The teachers and kids are looking up to you, asking were you part of that team, ‘God, that’s amazing’. And they’re Googling you! It’s great to get that recognition.”

And you thought of that and hoped the kids weren’t Googling the past week, because a lot of what they’d have seen was numbskullery of the very lowest order about women’s rugby and the team’s march to the semi-finals of the World Cup.

Fake tan! Mascara! Boobs! That class of thing. All of which kinda called to mind attending an Olympic conference on women in sport a few years back.

“Was it full of lezzers,” the man asked afterwards. Ah no, seriously, he did.

Do you laugh or cry?

Well, both is probably best when it comes to handling some characters’ views on women who play sport – who was it who said, “maturity is a high price to pay for growing up”?

Fiona Coghlan is the captain of the Irish rugby team. She was this trendy pseudo-liberal thought-control Gestapo paper’s Sportswoman of the Year in 2013.

Back at Old Belvedere in January, as she shivered in the dressing room before leaving for the pitch, she insisted there was nothing she loved more than training on a winter’s night with her comrades, despite having to be up at the crack of dawn next day to be in the gym, before heading to work. And when you headed home to defrost your nose in the central heating, you thought of them all still out there training, like sports men and women up and down the land, and the commitment required to reach the level these players have reached.

And you marvel at it all, because they’re the days and nights no one is watching, there’s no cheering or applause, the rest of us are at home in the warmth, oblivious to what they put in and give up for their sports.

And Niamh Briggs, Sophie Spence and Jenny Murphy echoed Coghlan’s feelings, as refreshing a quartet of sportspeople you’re ever likely to chat with: modest, charming, funny, self-deprecating, determined, fierce, passionate and talented. A nice contrast to, say, some of the ‘d’you know who I am?’ professional footballers you get to talk with now and then.

All for no reward, of course, other than the appreciation of the Irish people when the good times came. And they came, in spades, the last few weeks. Their achievements It would, then, be lovely if, one day, the achievements of our sportswomen could be discussed for what they are rather than having to wade through all this drivel every time one or more does something outstanding. We’ve barely passed that lengthy phase of ‘and do you like to dress up and look girly, Katie Taylor?’ stuff.

It’s unlikely that the girls Sophie Spence and her team-mates met, and will meet in the coming months, are inspired by their make-up, you’d guess their achievements in France, live on those young girls’ television screens (which is everything), might have done the trick. And you can be sure a bunch of them will be taking up rugby any day soon, so the pool of players available to future coaches of the national team will be considerably largely than the current group of pioneers.

Sure, like those young girls, maybe we’ll all grow up one day? Or is that trendy pseudo-liberal thought-control Gestapo stuff?