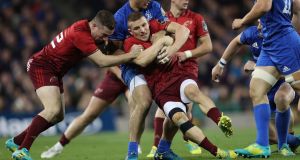 Leinster will take on Munster at the Aviva Stadium on Saturday, August 22nd with a 7.35pm kick-off. Photograph: Billy Stickland/Inpho

As expected, Ireland’s two postponed games in the 2020 Guinness Six Nations at home to Italy and away to France are set to go ahead on October 24th and 31st respectively, with the latter date also pencilled in for the Wales-Scotland and Italy-England games.

Furthermore, with the Rugby Championship set to take place in New Zealand over a reduced six-week period between November 7th and December 12th, a temporary international window between October 24th and December 5th will incorporate a European programme of international matches involving the Six Nations and invited teams from November 14th through to December 5th.

These recommendations from World Rugby’s executive committee require approval from the governing body’s council on July 30th, next Thursday, and will also accommodate the postponed women’s Six Nations matches at the end of October and a rest weekend on November 7th.

In so doing the council will be making a temporary change to the rules governing player release, meaning clubs will be obliged to release players for this expanded block.

“The temporary windows have been determined following extensive and productive consultation with international competitions, national unions, professional club competitions and international players,” said World Rugby in a statement. “The rescheduling means clubs will have access to their star southern hemisphere players for the completion of their seasons when they would ordinarily have been on international duty.”

The men’s and women’s games between Ireland and Italy are scheduled to take place on October 24th and 25th, with the round five fixtures re-scheduled for October 31st, one week after the Premiership final.

Ireland sit fourth in the 2020 Six Nations table, but could still mathematically win the title. Two bonus-point wins would guarantee as much while two wins of any hue would ensure a top-two finish.

The rearranged Wales-Scotland game, postponed a day before it was scheduled to take place in Cardiff on March 14th, is unlikely to take place in the Principality stadium, as the ground is expected to still be in use as a field hospital.

That game, along with their other revised fixtures, will take place in Wales or in London, depending on whether fans will be allowed to attend matches by then.

The four-week block reserved for a new programme of European-based Test matches will feature the Six Nations teams plus two others, potentially from Georgia, Japan and Fiji, or a composite Pacific Islands team.

Pending approval by the World Rugby council, Wednesday’s statement said that the competing unions and federations would announce the new list of Test matches “in due course”.

Meanwhile, also as forecast, the organisers of the Guinness Pro 14 have confirmed that the 2019-20 tournament finale will feature two rounds of derbies, beginning with Leinster v Munster at the Aviva Stadium on August 22nd (kick-off 7.35pm) followed by Connacht-Ulster at the same venue a day later (kick-off 3pm).

The final round of regular season games in a reduced 15-game format will see another double-header at the Aviva a week later, with Ulster having a six-day turnaround before facing Leinster on Saturday, August 29th (kick-off 7.35pm) and Munster against Connacht on Sunday, August 30th (kick-off 3pm).

Under competition rules, the postponed Zebre-Ospreys and Benetton-Ulster games have been declared 0-0, with two points awarded to each side, with qualification for the Heineken Champions Cup based on standings after 13 completed rounds and unaffected by the rescheduled matches.

The Pro 14 organisers have delayed officially nominating those who have qualified until EPCR confirms formats for the Champions Cup. However, The Irish Times understands that all the stakeholders in the latter competition have agreed in principle that next season’s Champions Cup will, for one season only, be expanded to 24 teams, thus ensuring eight qualifiers each from the Pro14, Top 14 and Premiership.

In this scenario the eight teams from the Pro 14 would be Leinster, Ulster, Glasgow and the Dragons from Conference A, as well as Edinburgh, Munster, Scarlets and Connacht from Conference B.

However, the rescheduled final two rounds of the Pro14 will count towards qualification for the 2019-20 playoffs, which have been restricted to semi-finals (on the weekend of September 4th-6th) and the final on Saturday, September 12th.

As things stand, Leinster (who have already won Conference A with a record 13 wins out of 13) would face Munster and Edinburgh would host Ulster. Dan McFarland’s team have a nine-point buffer over Glasgow and should reach the semi-finals, while Munster sit second in Conference B with an eight-point leeway over Scarlets and are two points adrift of Edinburgh.

There are also two rounds of derbies in Italy, (the tournament resumes with Benetton v Zebre on Friday, August 21st), Wales and Scotland, although no dates have yet been fixed for the Cheetahs-Kings games. Due to the current conditions of the Covid-19 pandemic in South Africa, both teams have only been allowed to return to non-contact training this week.

Rugby to return in England with rucking but no hugging 08:15
First pro rugby player in Ireland tests positive for Covid-19; Leipzig into final four 07:44
Prospect of magic number proves elusive at Wyndham Championship 07:08
Worst Sporting Moment: Mighty Nijinsky misses moment of triumph 06:00
Brennan concerned over scale of the challenge facing the GAA next year 08:03
Crossword Get access to over 6,000 interactive crosswords