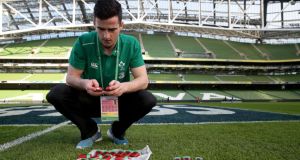 The IRFU’s Dan Downey sets up the GPS units on the Aviva Stadium’s pitch ahead of Ireland’s Six Nations game against France in February. Photograph: Dan Sheridan/Inpho.

Not so long ago a fag and orange segment was seen as restorative at half-time, an extra lap until you drop a good thing, a sign of heart. But in recent years metrics have become rugby’s living better bible.

They are colder and soulless but computer programs and algorithms with cutting-edge hardware and software that measure a dizzying array of measurements has made the old school running up and down a pitch appear almost as inappropriate as a smoke.

With every Irish team member now wearing a 50-gram Global Positioning System (GPS) snugly fitted into a pocket in the back of their shirt, bespoke players now take to the pitch to carry out defined functions with known workloads.

Irish company Statsports provides the expertise and pods and from modest beginnings they have grown into one of the world’s leading providers of performance analysis equipment.

Recent marks have been headline grabbers. The roll of an F16 fighter-jet is equivalent to around 9gs of force. Without protective suits and proper training pilots will pass out. The g-force of a car travelling at a 100kms per hour that comes to a stop in 0.2 seconds is 14.2g’s.

Irish tighthead prop Mike Ross can take forces of 15gs in the scrum and, in his last year of rugby before retirement, Brian O’Driscoll sustained a 27g hit in a Scott Williams tackle during Ireland’s game against Wales. Jamie Heaslip, Paul O’Connell, Cian Healy, Seán O’Brien and Rob Kearney will all give or take tackles registering between 10gs and 20gs in any given match.

In a New York Times report published in April 2013, Doug King, conducting a doctorate thesis on rugby impact in Hutt Old Boys Marist in New Zealand, recorded a g-force of 205 with no apparent injury to the player.

The GPS monitor tells how much of a beating a rugby player has to take in a match, although, it has not overtaken Joe Schmidt’s role. The intelligent eye of the Kiwi continues to trump raw data.

Clarke is a cautious scientist, who previously worked in the Scottish Institute of Sport with white water paddlers and British cyclists including six times Olympic gold medallist Chris Hoy. The South African is the man who studies the information gathered in the device.

The monitor has four processors, a state of the art GPS, an accelerometer, a gyroscope, a digital compass, long-range radio and a heart monitor, all of it tailored for rugby, the only game with 16-man scrums.

“If a player tackles someone and comes to almost a stop, that will register as a collision and will have a magnitude. I remember Brian O’Driscoll playing in a Test here and the papers sensationalised the number of gs of force that he hit as he went into the tackle,” says Clarke. 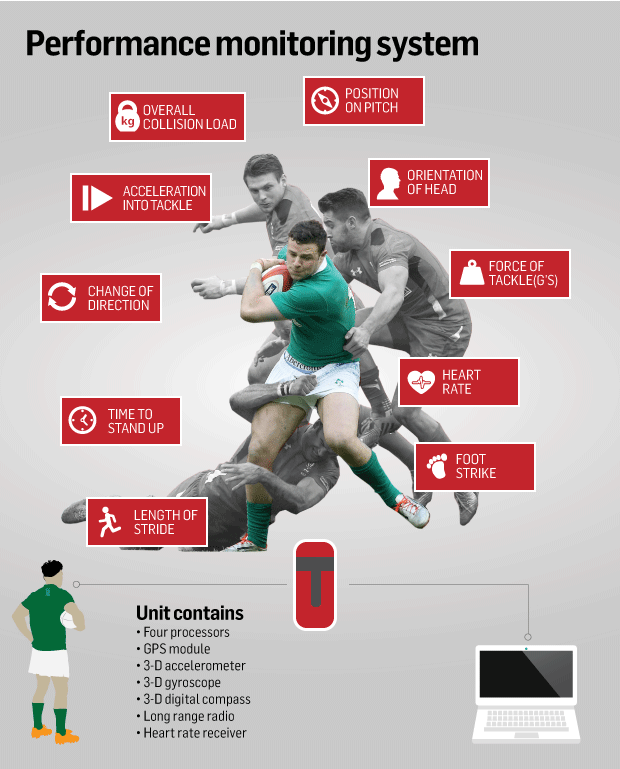 “The more important thing for us is that represented a collision. Then Brian would have fallen to the ground and that would be another collision, which wasn’t published.

“Then he would have taken some time to get back on to his feet which would have been measured by the gyroscope coming back into a standing position. That tells us how much time the tackle took Brian out of the game and that was the important marker for us.

“We ask what is an acceptable time for a person to be out of the game as a consequence of a tackle and we ask can we close it (time on the ground) down.”

Players have a grim fascination with the force of their tackles. But it’s only a fraction of the work the device carries out.

It also measures basics such as how far players run, how much of that is sprinting or changing direction, the pressure in scrums and when and what players are exerting it, the force of foot strike, decelerations, length of stride and heart rate. They call them dynamic stress loads and what it means is that Clarke and Schmidt can prepare their players for the toll a game will take.

“It has been very accurate in telling us about changes in position and referencing that to time,” says Clarke. “The real clever stuff is when it gets into the computer. The mathematics and algorithms and data allow us to determine how a player conducts himself in a game and the events they put themselves through.

“What’s more important to us is the number of collisions. We do put some store on the magnitude of collisions. But we look at how many is normal for say Jack McGrath and whether he goes significantly over that or under that. These are factors we consider in making a judgement on how well he played or how he needs to be prepared or repositioned to be more effective in the next game.

“The other thing about collisions is that they are measured through the length of the body and though foot strike. That is a significant physiological demand on players. The force that goes through your foot increases as you increase speed and changes when you accelerate or de-accelerate. So it’s a marker of magnitude on physical demand. We’ve to insure our preparation matches that demand.”

At the scrum for example Mike Ross at tighthead, Rory Best at hooker and Cian Healy at loosehead will take pressures at different moments during the engage. The locks and flankers may then come in and finally the number eight. The engage is measured in fractions of seconds but the pathway of acceleration sheds light on whether the timing of the eight players is good or marginally off.

The “sync time” is the time between the first impact and the last player coming in and the accelerometer measures that. When the scrum is complete, the gyroscope measures how long each player takes to stand up. And, depending on where they are on the pitch, whether they should be accelerating towards another play.

Video analysis crucially ties in with the data. A registered lack of acceleration after standing up may be due to a secondrow or prop taking up a defensive position beside where the scrum had been. But if the ball is played away, the expectation is they get up and move into the next phase.

The metrics are also different for each player and over time the fitness coaches have a map of the match performance of everybody in the squad across the positions. Backs Tommy Bowe, Rob Kearney and Simon Zebo would also be measured in the air, their hang time, the power they generate to get up, what leg might be stronger for taking off.

In the frontrow international props no longer play for a whole match as the coaches understand how metrics will change as they fatigue. That could be the engage or in their ability to move from phase to phase.

“The video analysis is where they get the quantities of events. What GPS does is put some of the qualitative data behind that,” says Clarke. “So how did that move look, was it effective, how fast was the person going when they made that break or how big was the collision required to carry the ball and make three metres in attack . . . as a consequence we can prepare and influence players physically to fulfil that task.”

The collisions in tackles and the breakdown, where they players grapple, are the most physically demanding sides of rugby. Even the tackle is parsed into acceleration into it, through it and the impact of the hit. It’s an area that is not about to get easier as forces get larger.

O’Driscoll didn’t retire because he fell out of love with the game but because he was in pain. Paul O’Connell has probably played his last game in the Six Nations, while Denis Leamy, Jerry Flannery and Bernard Jackman all departed because of their bodies. There is a side to the game that is capricious and it is there that the Viper Pods provide possibly the most effective tool.

“We would know about the players who you have touched on,” says Clarke, “who have had previous injury that we are trying to manage so that they remain healthy. We know how many sprints they can do in a session and if they were to exceed that would they expose themselves to risk? Sprints would be one metric, collisions another. We would mange player’s collisions right there, acutely.

“We would manage the players that need acute recovery in the first 24 to 48 hours. They would be put into an accelerated recovery group as a consequence of the quantity of collisions, the accelerations, the de-accelerations, all of those events that cause the most physiological damage. It’s a high intensity intermittent game and we now have a good description of that.”

More of a description than they could ever have imagined 10 years ago.