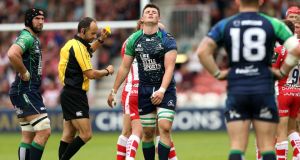 As one Connacht player put it, when you’re at the bottom of the food chain you get dry bread. It’s often said in team sports that the perceived ‘bigger’ teams benefit from more of the close calls by officials. Certainly Connacht have long since been a tad paranoid about this, and with good reason.

Akin to Ireland back in the 1990s, when a team is perceived to be inferior, or winning against the odds, they usually seemed to draw the short straw in another plucky defeat. In Ireland’s case, only when they began winning more games and changing that perception, did those close calls appear to go more in their favour. Of course, Connacht left far more close games behind this season due to their own failings, so they control this more than anybody.

But the perception can begin at home too. In provincial derbies, Connacht invariably lost the penalty count when an Irish referee was in charge – and had the stats to underline their point. With more derby wins of late, at the Sportsground anyway, perhaps Irish referees have altered their impression.

Yet especially away from home in the Pro12 and in Europe, the majority of the close calls have seemed to go against them. It happened in Cardiff in early March when privately the Pro12 admitted to Connacht that a couple of late calls by the touch judge Leighton Hodges, which led to a controversial 18-17 defeat, had wrongly gone against them.

But, as with Romain Poite’s two erroneous calls in Sunday’s endgame at Kingsholm which effectively cost Connacht a win over Gloucester, one of the problems with rugby is that referees are not held accountable.

It’s easy to criticise from the cheap seats, but marginal calls in close endgames are too often coming down to the interpretation of one individual. Kingsholm also maintained a pattern over the weekend when late referrals to the TMO all led to key decisions going in the home team’s favour, as Glasgow and Munster overcame Ulster and the Ospreys in the Pro12 semi-finals.

The difference in those two games is that George Clancy had set an Ulster scrum when he was moved to resort to his TMO by the crowd’s reaction to an earlier incident involving Ulster’s Ricky Lutton and the Warriors’ Nikola Matawalu which was replayed on the big screen. Lutton should not have moved his arm across Matawalu, but for the second time in the match Matawalu earned his side a penalty with a theatrical dive.

Rugby does not need simulation. It certainly doesn’t need to see it rewarded and in emulating Wayne Barnes, Clancy has set another dangerous precedent. Seemingly there is effectively an appeals system with some refs now – if it emanates from the home crowd.

It’s hard to believe Nigel Owens would have fallen for Matawalu’s histrionics. Furthermore, Owens had not signalled a try by Josh Matavesi with the 80 minutes up at Thomond Park but instead had decided to refer to his TMO for the earlier knock-on by Rhys Webb.

Ulster have now lost eight of 11 knockout matches in the last five seasons, and their sense of grievance is compounded by the memory of Jérôme Garcès’ incorrect red card against Jared Payne in their 17-15 Heineken Cup quarter-final defeat to Saracens at home last season. For many Ulster players on the day, and perhaps all of them, that could prove the chance of a lifetime.

By contrast, Munster crossed a threshold with their win over the Ospreys, as they had lost nine of their previous 10 semi-finals since that benchmark Heineken Cup defeat to Leinster in 2009.

For Connacht though, their status as the nearly men remains intact. A win against Gloucester might have started changing perceptions, especially if they had then reached the Champions Cup off their own bat. There is also the effect on their recruitment, for in a more scaled down way, it’s akin to a club missing out on the Champions League.

Other indigenous academy players to have featured this season have been lock Ultan Dillane, scrumhalf Caolin Blade, hooker Shane Delahunt and centre Conor Finn. To this can be added the injured Kieran Marmion, Darragh Leader and Ronan Loughney. Something special is undoubtedly stirring in the west.

The one nagging concern is the feeling this may be a relatively short window of IRFU-backed opportunity and general positivity under Pat Lam. If they don’t qualify for the Champions Cup in the next season or two, you wonder when they will, all the more so after Sunday’s cruel climax.